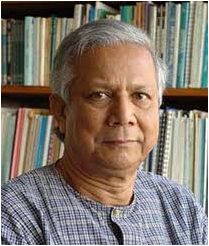 Prof Muhammad Yunus is one of our Laureates-in-Residence.

Muhammad Yunus “Banker to the Poor”
Professor Muhammad Yunus established the Grameen Bank in Bangladesh in 1983, fueled by the belief that credit is a fundamental human right. His objective was to help poor people escape from poverty by providing loans on terms suitable to them and by teaching them a few sound financial principles so they could help themselves.

From Dr. Yunus’ personal loan of small amounts of money to destitute basketweavers in Bangladesh in the mid-70s, the Grameen Bank has advanced to the forefront of a burgeoning world movement toward eradicating poverty through microlending. Replicas of the Grameen Bank model operate in more than 100 countries worldwide.

From 1993 to 1995, Professor Yunus was a member of the International Advisory Group for the Fourth World Conference on Women, a post to which he was appointed by the UN secretary general. He has served on the Global Commission of Women’s Health, the Advisory Council for Sustainable Economic Development and the UN Expert Group on Women and Finance.

This autobiography/biography was written at the time of the award and later published in the book series Les Prix Nobel/Nobel Lectures. The information is sometimes updated with an addendum submitted by the Laureate.