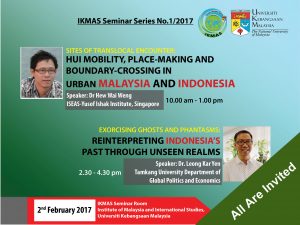 Hui Muslims have a long existence in Southeast Asia. Their recent increase and visibility of presence in Malaysia and Indonesia started since 1990s. Many Hui Muslims, primarily from the Northwestern parts in China, arrived in Malaysia to further studies. Some of them came as businessmen or religious scholars. They run shops selling Islamic clothes which are imported from China, open restaurants serving halal Chinese cuisine, operate a website on Islam in Mandarin and participate in the activities of Chinese-style mosques. For many Hui migrants, mobility goes hand in hand with business, and their business activities intersect with their religious commitments.

This seminar aims to examine the intersection between trans-local mobility, economic aspirations and religious activities of Hui migrants; as well as the interconnection between migration, urban diversity and social encountered in Malaysia and Indonesia today. Hui mobility entails not only the movement of people, but also the travel of architectural style, cuisine and knowledge, as reflected in various urban infrastructures such as the Hui restaurants, Chinese-style mosques and various Islamic educational institutions. These places provide sites of interaction between Muslims and non-Muslims, between Chinese and non-Chinese, between citizens and non-citizens.

Based on ethnographic fieldwork, informal conservations and semi-structured interviews, this paper explores trans-local migration routes many Hui have taken, often begin with travelling across different cities in China, before reaching Malaysia and Indonesia, and followed by the desire to visit to Middle Eastern countries. I will discuss two possibilities to further develop this research project – first, a comparison of Hui Muslims in Thailand and Myanmar; second, a multi-sited ethnography of Hui mobility by visiting their places of origin in China. Broadly speaking, this research on contemporary Hui mobility allows us to reflect on key issues such as globalisation, migration, urban diversity and identity politics (especially related to Islam and Chinese) in Southeast Asian region

Dr. Hew Wai Weng is a Visiting Fellow at the ISEAS-Yusof Ishak Institute, Singapore and working on a project, ‘Religious Gentrification: Islam, Middle Classes and Place-Making in Urban Malaysia and Indonesia’. He has been writing on Chinese Muslim identities, Hui migration patterns, and urban middle class Muslim aspirations in Malaysia and Indonesia. He was a postdoctoral fellow at the International Institute for Asian Studies, Leiden and a research fellow at Zentrum Moderner Orient, Berlin. He is the author of Identiti Cina Muslim di Malaysia: Persempadanan, Perundingan dan Kacukan Budaya [Chinese Muslim Identities in Malaysia: Boundary-making, Identity Negotiation and Cultural Hybridity] (UKM Press, 2014) and Chinese Ways of Being Muslim: Negotiating Ethnicity and Religiosity in Indonesia (NIAS Press, 2017).

The historical interpretation as well as presentation of the events of post-Sukarno 1965 is often shrouded in fear and silence. Despite the efforts of NGOs, human rights groups and academics, attempts at reinterpretation or revising the Indonesia’s past has often been met with fierce opposition. Groups which are religiously or militarily-affiliated often brand any such attempts at revising the history of 1965 as being a form of conspiracies to the flag of communism on Indonesia’s soil. Fringe groups such as the Islamic Defenders Front and the Anti-Communist Front have been at the fore front of violently disruptive actions against, exhibitions, movie screenings or even discussions about that specific period. These groups often brand any revisionist retelling of 1965 as arising from an ethereal latent danger (bahaya laten) present in Komunisme Gaya Baru or new-style Communism.

This discourse bears an uncanny resemblance to the New Order regime’s paranoiac fears of ‘formless organizations’ or ‘organisasi tanpa bentuk’ subverting the state from within. Utilising opaque language and taking advantage of an ‘occult economy’ already present within Indonesia, the New Order regime was able to create an atmosphere of fear and foreboding. Nonetheless, despite the overthrown of Suharto’s New Order regime, Indonesia continues to live amongst the shadows and phantasms which have yet to exorcise even after nearly 20 years of democratic transition. This paper aims to investigate the rising phenomenon of an ‘occult economy’ arising from the ‘unspoken’ events of 1965. My paper will specifically look at how spaces of past violence have been transformed into memorials testifying to Indonesia’s ‘silenced past’. I will also be investigating rumors and ghosts stories hypothesizing that these elements of the ‘occult economy’ represent a way in which the past expresses itself even as fringe factions and groups continue to maintain an ‘enforced silence’ on the events of 1965. This paper highlights that through the investigation of these events and by presenting them as symbolic tropes, we can gain deeper understanding of how nations and societies reconcile with their pasts in transitional contexts.

Dr. Kar-Yen Leong is an assistant professor of Global Politics and Economics at Tamkang University in Taiwan. With a background in Southeast Asian Studies, Dr. Leong is interested in the ways the region grapples with its past, present as well as future. 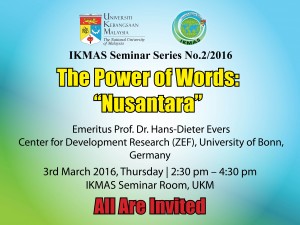 ‘Nusantara’ is a concept to which different meanings have been attached throughout Southeast Asian history. It made its first noticeable appearance in texts of the fourteenth century, disappeared for a while, and then resurfaced after hundreds of years, when it was (re)discovered in the early nineteenth and twenty-first centuries. This presentation explores how the meaning of ‘nusantara’ has changed over time. In 1334 Gadjah Mada, the chief minister of the Majapahit Empire, swore an oath (sumpah palapa)  that he would conquer a number of kingdoms on the maritime fringes (the Nusantara) of the Majapahit Empire. The concept Nusantara re-emerged during the anti-colonial struggle, when it captured the imagination of writers, novelists, poets and politicians in Indonesia and British Malaya. The term eventually disappeared as a political concept from public debates, to resurface in the 1990s, when it became widely used to adorn company names,  newspaper reports, policy briefs, scholarly articles, and political organisations. More recently, “Nusantara” has become very popular throughout Southeast Asia with the emergence of a Nusantara Youth culture and “Islam Nusantara”. The paper concludes by drawing attention to the importance of a Malaysian Nusantara concept for settling disputes in the South China Sea. 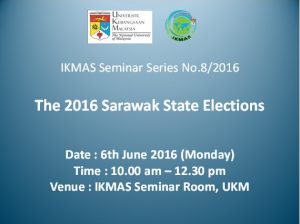 The Sarawak Barisan Nasional, the incumbent governing coalition under the leadership of Chief Minister Adenan Satem, won 72 out of 82 seats – almost a clean sweep, surpassing Adenan Satem’s own expectation. Why did Sarawakians voted overwhelmingly for the Barisan Nasional? Conversely, why did the opposition parties fared badly? These two intriguing questions will be the focus of this seminar. Apart from that, this seminar will also discuss the 2016 election at the micro level by looking at the local dynamics in several urban and rural seats in Sibu, Kuching and Sri Aman. Among the local dynamics that will be analyzed are the campaign strategies of the contesting parties and candidates; the campaign issues; vote-buying; the role of local strongmen; the power play between local component parties and the dynamics of national and local leaders. In addition to discussing the salient features of the election, this seminar will also look at the meaning of the 2016 election to Sarawak domestic politics and Sarawak’s relations with the federal government in Putrajaya. 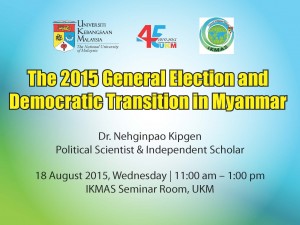 The 2015 General Election and Democratic Transition in Myanmar

ABSTRACT
Voting is scheduled to take place across Myanmar on November 8, 2015. The Pyidaungsu Hluttaw or Assembly of the Union, which has 664 seats, is made up of two houses – the House of Nationalities/Amyotha Hluttaw/Upper House of 224 seats and the House of Representatives/Pyithu Hluttaw/Lower House of 440 seats. About 90 political parties are expected to take part in the election broadly under three categories – the Union Solidarity and Development Party (USDP), the National League for Democracy (NLD) and other Burman-led smaller parties, and ethnic-based parties. While the country prepares for a general election, it remains to be seen as to how political parties will take part in the electoral process and for the formation of a new government. There are certain lingering questions. For example, will the military or the USDP government allow a free and fair election? If a political deadlock arises after the election, will the two dominant parties – USDP and NLD – be willing to compromise for a smooth transition to democracy? On the other hand, since the national parliament failed to support amendment of the 2008 constitution in June this year, how will the NLD pursue its political strategy and what role will Aung San Suu Kyi play after the election since she is now constitutionally barred from becoming the country’s next president? Should the situation demand, will ethnic-based political parties ally themselves with any of the two dominant political parties or choose to remain as a third political force, or consider forming an alliance with other smaller parties? The talk will examine the different political landscape possibilities, in the aftermath of the general election, and prospects of Myanmar’s democratic transition. 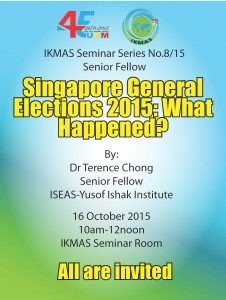 In 2011, the ruling People’s Action Party suffered its worst result at the polls since independence with 60.1 per cent of the vote. Liberal immigration policies, coupled with inadequate housing and transport infrastructure, were blamed for PAP’s poor showing. Fast-forward to the 2015 General Election held on 11 September. For the first time since the city-sate’s independence all Parliamentary seats were contested, allowing 2.4 million Singaporeans to cast their vote. This time the PAP won 69.8 per cent of the popular vote while all opposition parties experienced a decline in their vote share. This was a near 10 per cent swing, thus reversing the incumbent’s vote share decline that began in 2006. Out of 89 seats, the PAP won 82, with the other seven seats going to The Workers; Party (WP). What happen? How did the PAP claw back its support?

This seminar offers several explanations for the PAP’s big win. It will examine key social policies that have been put in place since 2011 as well as the psychological impact of the passing of the nation’s first Prime Minister in March this year. It will also attempt to interpret what the results say about the Singaporean voter and the implications for governance and politics in Singapore in the coming years. 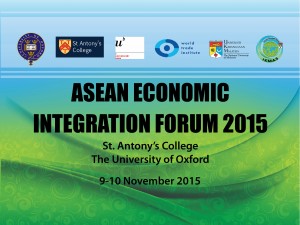 Discussions at the Forum will focus on three main themes:

The Convenors have invited prominent speakers and experts on ASEAN Economic Integration and related topics to share their insights on prospects for continued integration beyond 2015. 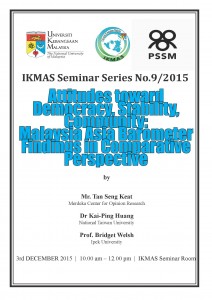 This joint presentation details the findings of the Malaysia 4th wave (2013-2015) Asia Barometer Survey and shows how Malaysian political attitudes compare to its regional neighbours and, using earlier ABS data from 2nd-3rd waves, and have changed over the last decade. Special focus centers on political values, trust in institutions, social capital and trust, ethnic relations, support and understanding of democracy and views of globalization and regional powers. The session will include three presentations, on the ABS methodology, cross-regional comparisons and changes over time.