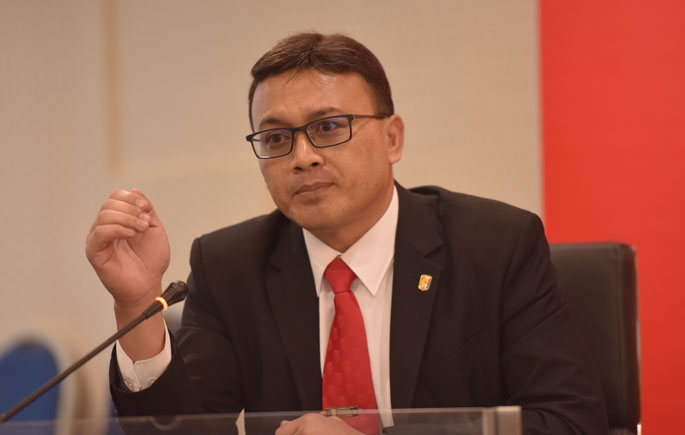 By Asmahanim Amir
Pictures by Centre for Corporate Communications

BANGI, 25 Nov 2017 – Intelligent Weather Station and Flood Warning System (iWarner), developed by UKM Deputy Vice-Chancellor of Research and Innovation, Prof Dr Hj. Mohd Ekhwan Toriman is a system which provides  warning if there is a flood in one area.

Prof Dr Mohd Ekhwan said the system was developed in 2015 after getting the top down grant from the Ministry of Higher Education (MoHE) for the preparation of a paper on a major flood of the year 2014 which occurred in Kuala Krai, Kelantan.

“From the grant, we collaborated with industries and stakeholders, including the National Disaster Agency Malaysia (NADMA), National Security Council (MKN) and Department of Irrigation and Drainage (DID).

“This grant focuses on two aspects, namely the preparation of disaster control systems, in particular floods and warning systems against natural disasters,” he explained.

He said the idea for iWarner system came up after observing the flooding problems which Universiti Sultan Zainal Abidin (UniSZA), Gong Badak has been facing for almost 35 years.

“iWarner was made in line with the design of the flood catchment pond that I made in 2014,  which helps to manage the excess of water, especially in Kuala Nerus,” he said.

He said iWarner was an example of a collaborative research between  UKM’s School of Social Development and Environment and UniSZA’s  Faculty of Information Technology and Institute of Environmental Research of East Coast (ESERI).

“iWarner has been installed in some areas, especially in the UniSZA campus, Kuala Nerus and some areas in Tawau, Sabah,” he said.

He said in the future, iWarner will be combined with the national flood information system that can be accessed through the system developed by NADMA and DID, and will involve several elements such as sensors for discharge water and flood water quality.

Users can access the iWarner through their respective smartphones via www.iwarner.robopro.org.

“The main feature of iWarner is the ability to provide information in advance to people exposed to the flood disaster and give them the opportunity to move to the location designated by the authorities.

“This system is not expensive and has security features as well as high specification in sensing the flow of flood water,” Prof Dr Mohd Ekhwan explained.