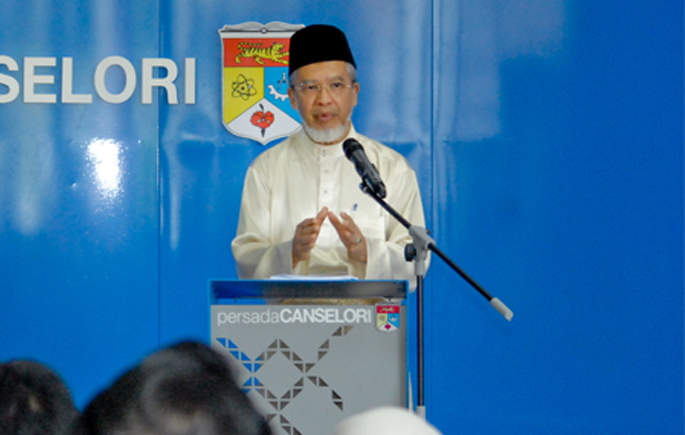 Bangi, 9 January 2015 – Muslims in Malaysia, especially in universities and colleges, should not be easily swayed by a variety of liberal movements from abroad which have become very influential in Indonesia.

In his public lecture Addressing the Challenges of the Islamic Liberal Thinking Network, at the bicara persada forum in The National University of Malaysia (UKM) here today, Prof Muhammad Kamal advised Muslims not to be duped into accepting the philosophy that equates all religions with Islam.

“All religions in Malaysia must oppose radicalism and extremism. Common sense and rational thought is not to damage the religion but should instead be used to strengthen the faith,” he said.

He lamented that some felt that reasoning is the same as divine revelation. “Common Sense is God’s creation. Divine Revelation comes directly from God. But what is wrong is to think that common sense can become divine,” he said.

Prof Muhammad Kamal said Liberal Islamic movement was influenced by western liberal agenda to divide Muslims by giving a lot of labels to it.

“The West has the desire to make Muslims think in their framework, that there a plurality of Islam like Sufism, hard-line, moderate, secular, pacifist, extremist, violent and so on, ” he said.

He said mainstream Islam as determined by the government should be strengthened and followed.

Muslims must be inclusive, but it is not the same as liberalism. Islam is strict and uncompromising in that,” he stressed.

For him, it is not reasonable for the liberal Muslims in Malaysia to try to get support from leaders of other countries to emphasize to the government to be more open about Islam.

“There are among those who want (US President Barack) Obama to make a statement against the government during his visit to Malaysia recently,” he said.

Prof Muhammad Kamal, who does a lot of research in Indonesia and had been closely acquainted with scholars there compared the situation in Malaysia with what was happening there.

“Our Universities had not succumbed to the pressures of liberalism unlike in Indonesia where it already exists. Iran offered Indonesia to build a large mosque over the tombs of its mystics and the Indonesian Minister for Religion had recently agreed to it,” he said.

In Indonesia, the so-called liberal Islamic network is very influential to the extent of influencing government policies.

Pancasila is the official philosophical foundation of the Indonesian state which places all faiths practiced there as equal.

Prof Muhammad Kamal had widely discussed the matter with Islamic thinkers in Indonesia, some of whom he considered being secular. Among them was former Indonesian president Abdurrahman Wahid and also General Ali Murtopo.

The reform movement in Indonesia after President Suharto had liberated the country so much that many Islamic movements emerged and carried out missionary activities with multiple teachings.

Among them is that religious belief is a private matter and that non-Muslims can maintain their status when married to Muslims and that all religions are equal.

A fatwa was issued by the country’s highest Islamic body – the Religious Council of Indonesia – which outlawed liberalism but it could not be enforced.