UKM And Georgian University To Explore Options for Cooperation 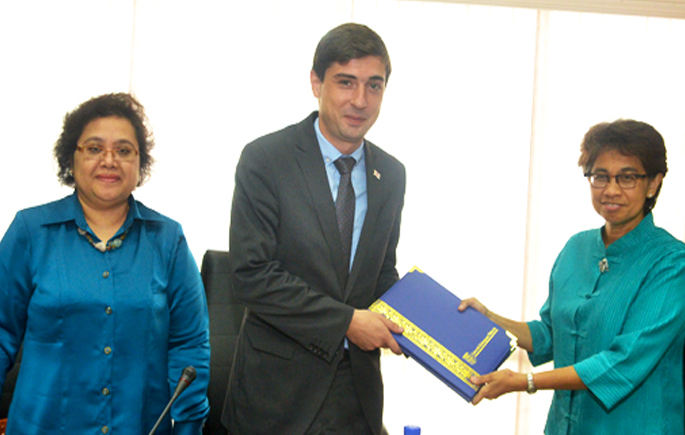 Both universities signed a Letter of Intent (LOI), here today allowing the exchanges of information of library materials and research publications.

It was signed by the Director of the Institute of Malaysian and International Studies (IKMAS) UKM, Professor Dr Rashila Ramli and the Charge d’Affaires of Georgia here, Levan Machavariani.

Machavariani described the LOI as a move for stronger bilateral relations between his country and Malaysia especially in the education sector and expects more such cooperation to be established.

He said with the LOI, both universities agreed to carry out the exchanges of academic staff and postgraduate students for study and research in addition to having exchanges in community services and culture along with performances of their cultural troupes.

Officials of both universities will initiate talks on cooperation in various forms.

Prof Rashila said UKM was selected by TSU because UKM through the Institute of Occidental Studies (IKON) specialises in the study of Western or Occidental civilisation in all its forms.

“If all goes well, a Memorandum of Understanding (MoU) will be signed between the two universities by next year,” she said after the signing ceremony.

For a start, the student exchange programme will be initiated between the two universities.

“We can examine their educational system, study the country itself and explore other possible areas for research collaborations,” Prof Rashila said.

The areas for research include political, security, culture and society, economic development and regionalisation saying that Georgia is located in a strategic area, regarded as an important crossroads where Europe meets Asia.

She said the country’s long history of being ruled by Russia is an interesting field to study by researchers.

Machavariani earlier delivered a lecture on ‘Foreign Policy of Georgia and Current Developments in the Caucasus Region’, jointly organised by UKM and the Embassy of Georgia in Kuala Lumpur.