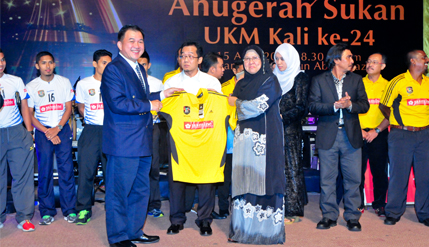 BANGI, 25 April 2014 – Footballer Reuben Thayaparan and softball player Nor Fatin Syuhada Binti Abu Bakar were selected as the Best Male and Female Athlete of The National University of Malaysia (UKM) for 2013.

Their selection was announced at the 24THAnnual UKM Sports Awards at the Tun Abdul Razak Hall (DECTAR) here last week.

They both received their awards in the form of a trophy, certificate and cash prize of RM1000 each from Deputy Minister in the Prime Minister’s Department Dato’ Razali Ibrahim who also launched the UKM FC football team.

Awards were also given out to winners in 21 categories of sports.

For the staff category, the Best Male Athlete 2013 was won by sepak takraw player Mohd Muqlis Borhan, with volleyball player Iza Nurfitriana Mohd Nor judged as the best female athlete.

Razali, a UKM alumnus from the Faculty of Law reminisced his student days in the campus where he was captain of the UKM Rugby team.

The UKM FC was formed in 2013 to participate in the FAM League and to date the team was the champion of the KPT Ministers Cup 2012, Second Place finish in the IPT League in 2013 and are currently leading the 2014 IPT League in division 1.