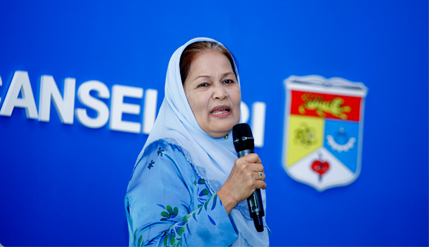 BANGI, 11 November 2014 – Apathy and corruption are the main causes of Malaysia’s security steadily being compromised through porous borders, particularly in the north of the peninsular and in Sabah.

Participants at the Bicara Persada forum onNational Border Security: A Dilemma Analysed? at The National University Of Malaysia (UKM) here today agreed that border security should be improved otherwise the future of the country would be in  jeopardy.

They said the findings of the Royal Commission of Inquiry (RCI) set up to investigate illegal immigrants in Sabah only confirmed weaknesses that had long been known, that problems of human trafficking of economic migrants and smuggling are becoming worse.

One of the speakers Professor Dr Azizah Kassim of the Institute of Malaysian and International Studies (IKMAS) of UKM said her research spanning many years showed that corruption is openly being practised at critical border areas.

Prof Azizah said while the offences may not amount to mass movements of insurgents or terrorists at the Malaysia-Thai border, there were blatant violations of border control being committed openly while guards were conveniently not present.

“It is very costly to enter legally at about RM7,800 but entering through people traffickers costs only a fraction of that,” she said.

Employers are partly to be blamed because they are reluctant to recruit local workers.

“Low-skilled workers are in great demand. The illegal migrants are more diligent and complain less, while local workers are too fussy, less productive and want more leave. Moreover, the foreign workers are less likely to hop from one job to another,” she said.

Associate Prof Dr Noraini Ibrahim, an applied linguist at the Faculty of Social Sciences and Humanities, analysed the February to April 2013 armed incursion of Sulu gunmen into Lahad Datu from the media point of view.

Dr Noraini said when news first broke about the intrusion on February 12, 2013, the mainstream English-language media in Malaysia, the Philippines and Indonesia used neutral and straight reporting of the incident.

As the attacks dragged on, she noticed that the local media became increasingly partisan and nationalistic, especially when security and armed forces personnel were being killed. From being ‘gunmen’ and ‘intruders’, the Sulu force became ‘terrorists’, especially when the Prime Minister personally took charge of the operations.

However, the major dailies in the Philippines and Indonesia were more subtle and did not show obvious bias, although newspapers such as the Filipino tabloid Daily Inquirer did give some mileage to the ‘terrorists’ grievances.

A researcher from the Sabah Institute of Development Studies (IDS), a State government think tank, Anthony Kiob said the influx of illegal immigrants into Sabah had brought with them a belief that the state belonged to the so-called Sultanate of Sulu.

Despite the claim by the self-proclaimed Sultan of Sulu on Sabah being very tenuous because of historical and legal precedence, many Sulu people who came in and out of Sabah felt that they had a right to be there and were not ‘pendatang’ (migrants).

Anthony acknowledged that such a belief was further strengthened when many of them were welcomed into Sabah and received blue identity cards as was revealed by the RCI.

Perhaps that was the reason the Sulu infiltrators arrogantly thought that they could claim Lahad Datu to be theirs, he said.