Photovoltaic technologies have significant long term potential to provide sustainable energy for the world’s needs. Photovoltaic are silent, clean in operation, highly reliable, low maintenance, and extremely robust, with expected lifetime of at least 20 or 30 years. They are also very modular, and can be adapted for many locations or easily extended. Solar electricity can also displace fossil fuel use with many environmental benefits. The energy involved in the manufacture of the panels can be quickly overtaken by the energy produced by the photovoltaic panels. One of the most attractive applications is the use of photovoltaic on buildings, commonly known as Building Integrated Photovoltaic or BIPV. Studies on BIPV include strategies for the long term cost reduction and innovative architectural integration in buildings.

Electrolysis is the most developed technology for producing hydrogen from water, which can be operated by means of solar energy. Hydrogen has been regarded as the future fuel. The product of combustion of hydrogen is water, which can be recycled to produced hydrogen by means of electrolysis. Hydrogen can be converted directly into electricity in fuel cells, modified IC engines run on hydrogen and power plants can use steam, which is produced in hydrogen steam generators, during peak load periods. Even airplanes are being developed to run on liquid hydrogen, which is especially advantageous because of its high energy content by weight. Hydrogen would be collected, stored and distributed both gaseous and liquid as a pollution free fuel that can be converted into other energy forms at high efficiencies. The main components are the photovoltaic panel, the energy storage batteries, voltage regulator, electrolyzer and hydrogen storage tank. 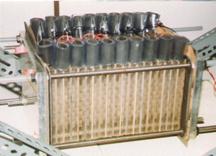