MyMangrove Directory and Database of Contacts

The United Nations Educational, Scientific and Cultural Organisation (UNESCO) at their 38th General Assembly on the 6th of November 2015 adopted a resolution recognising and proclaiming that 26th July each year is celebrated worldwide as the International Day for the Conservation of the Mangrove Ecosystem. In conjunction with its second celebration on the 26th of July 2017, a group of Malaysian mangrove and mangrove-related scientists gathered to discuss fundamental issues concerning mangroves and mangrove research in Malaysia at the Inaugural Workshop of the Malaysian Mangrove Research Alliance & Network (MyMangrove).

MyMangrove is an inter-disciplinary scientific core group of researchers from local universities, research institutions and relevant environmental NGOs focusing chiefly on the ecology, conservation and management of mangroves in Malaysia. MyMangrove promotes collaborative research work between individuals and institutions and allows for a stronger scientific cooperation to intensify knowledge and understanding, and to amplify national appreciation, awareness and sound-scientific conservation. It is aimed to be a hub or a platform for mangrove scientists and researchers to get together to discuss and develop new ideas and findings, to enhance education and training on mangroves, and to collaborate in research projects, community services, consultation and policy interventions.

Mangrove forest management has taken place in Malaysia since the early 20th century when a systematic forestry regime for charcoal production began in Matang. Matang mangrove then appeared to be the global subject for ecological research and silvicultural studies. A landmark study by J.G. Watson in 1928 epitomised the beginning of debates on mangrove forest structure, zonation and diversity. This publication became one of the most cited articles in global mangrove research. Since then, interest on mangroves and the Matang mangroves in particular increased through the years and decades. Numerous research have been carried out by local and international scientists and foresters, and until today, Matang mangrove is recognised as the world’s best managed mangrove forest. For more than 110 years now, the sustainable forest management practice in Matang mangrove is being emulated and referred to by forest authorities in other states, countries and regions.

Although much of the research on Malaysian mangroves have been published and known globally, the understanding, interest and concern among Malaysians are still relatively very low. Though awareness on the importance of mangroves increased in the past years, it was actually sparked by the devastating tsunami event in 2004. Malaysians generally took for granted the rich resources and benefits provided by our mangroves, and this is indicated by the lack of historical data and information related to our mangroves. Mangrove researchers have been working individually or in small groups, and the force was insufficient to elevate knowledge, to intervene in policy-making and to reach out to a nation-wide audience. Therefore, MyMangrove was initiated to bring scientists and researchers together, to join forces and efforts for the benefit of our mangroves and their connecting habitats and ecosystems. Scientific inputs will then be translated into actions for the general public through programs targeting local communities, NGOs, students, corporate sectors and government agencies.

Tan Sri Dato’ Seri Dr. Salleh Mohd. Nor officially opened and participated in the one-day workshop held at the Danau Golf Club in Universiti Kebangsaan Malaysia Bangi. In his opening address, Dr. Salleh highlighted the importance of mangroves and the dire need for comprehensive and integrated research, and scientific communications of our mangroves by our very own researchers. He urged all sectors including the government, corporate and the communities to fully support MyMangrove’s research and conservation agendas for the benefit of all. Dr. Salleh spoke based on his vast experience as the former Director-General of Forest Research Institute of Malaysia (FRIM), former President of the Malaysian Nature Society (MNS), and former Chairman of the then National Mangrove Committee (NATMANCOM). Ultimately, MyMangrove anticipates to become a dynamic scientific-based advocate for the sustainability of national, regional and global mangroves. 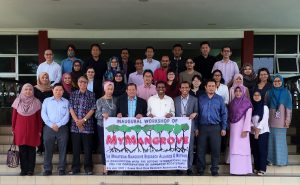 MyMangrove Directory and Database of Contacts