Department of Chemical and Process Engineering 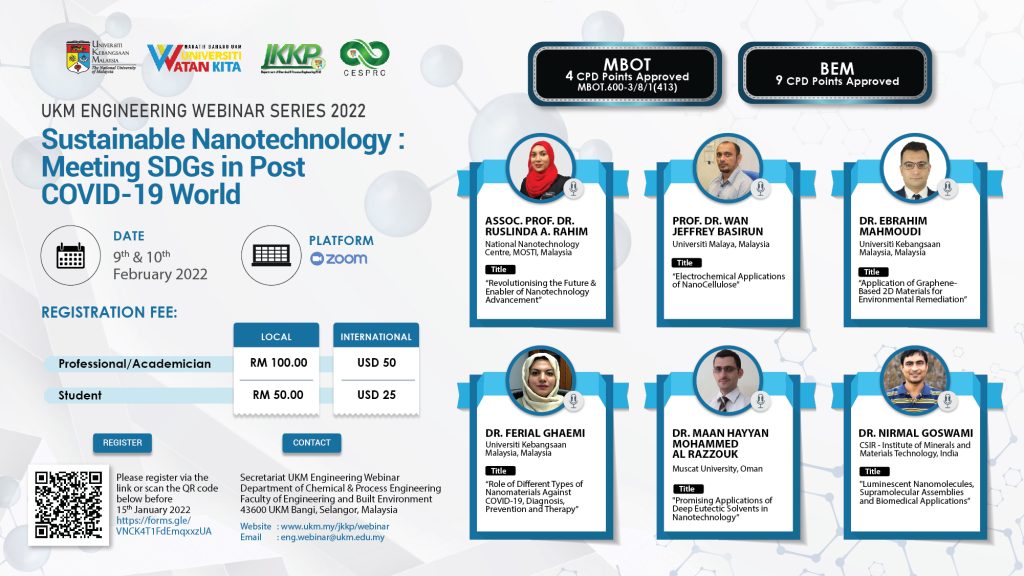 Role of Different Types of Nanomaterials Against COVID-19, Diagnosis, Prevention and Therapy

Nanotechnology is no longer peculiar in today’s technology development. It is vitally positioned as an emerging technology that has and will contribute significantly to economic growth and job creation in the coming decades and bring a profound revolution to the future.
Nanotechnology comprises a disparate array of unrelated technologies that cut across many traditional scientific disciplines, including nanoscale materials or nanomaterials with unique properties that cannot be harnessed from their bulk counterparts. This novelty in properties has since improved and revolutionised many technological and industrial sectors, including but not limited to medicine, food and water security, information technology, communication, transportation as well as environmental degradation mitigation.
The importance of nanotechnology has been recognised since the late 1990s to early 2000s, where nanoscience has since then been referred to as “horizontal”, “key”, and “enabler” due to its pervasiveness in virtually all technological sectors. In the last two decades, the global approach to nanotechnology governance has evolved considerably, starting with the confirmation on the viability and societal importance of nanotechnology applications to economic and societal outcomes of nanotechnology products, especially in environmental, health and safety aspects as well as its ethical, legal, and social implications of nanotechnology.
Envisioned to reach mass applications in products and processes, nanotechnology has shifted to a more complex generation of nanotechnology products and the need to address broad societal challenges such as sustainability and health responsibly. This migration in scientific capability to complex nano-systems and molecular bottom-up nanotechnology-based components is projected to multiply the potential for societal benefits and science, technology, innovation advancement.

Graphene oxide (GO) has gained popularity in scientific research and industry due to its superior properties, which can be controlled by the synthesis method and graphite feedstock. Owing to the superior properties of graphene, it has become the center of attention in the scientific research and is believed to be a material that could revolutionize the 21st century. Similar to graphene, GO is equally versatile and has various properties and functionalities for a wide range of applications. Graphene oxide (GO) can be obtained by chemical oxidation of graphite. The produced GO is a single-atomic-layered carbon material with the honeycomb lattice arrangement. GO retains the layer structure of graphite but with exfoliated irregular spacing and possesses abundance of reactive oxygen functional groups, such as carboxyl, hydroxyl and epoxy. The presence of such functional groups results in a hydrophilic nature of GO, and thus GO can be dispersed in water and other organic solvents such as N-Methyl-2-pyrrolidone (NMP), acetone, and Dimethylacetamide (DMA), to name a few. Such property is a major advantage when blending the GO or factionalized GO to improve the properties of polymer or ceramic for various manufacturing. In addition, GO could be one of the possible intermediates in the manufacturing of graphene in large scales . In a nutshell, graphene and GO have numerous applications in both science and industry.

These multifarious applications require graphene and graphene oxide with a variety of properties to fulfill the need in different research area and applications. For instance, graphene used for the production of conductive electronics is preferable to be without any defects in its π-π structure, as the defects will reduce the conductivity and render it less performing. At the same time, localized defects in the π-π structure of the graphene might reduce the mechanical properties of graphene . However, the same localized defects in π-π structure of the graphite are desirable in some other applications. These defects could serve as seed points for the oxidation process where the functional groups could be introduced . Higher number of defects in π-π structure, thus, can contribute to higher degree of oxidation . A higher number of functional groups on the GO surface can lead to the formation of GO with higher hydrophilicity and more negative charge due to formation of functional groups (epoxy, carboxyl, and the hydroxyl groups) with negative charge . Hence a graphite with high number of defects is favourable in applications such as membrane fabrication and adsorption where highly oxidation (more functional groups) is required .

“Metal nanomolecules” also popularly known as, “nanoclusters” have recently emerged as a rising star in the research community because of their unique molecular-like properties such as HOMO-LUMO transition, photoluminescence, chirality, redox behavior etc. They are ultra-small in size (< 2 nm), often considered to offer the bridging gap between atoms and nanoparticles (3-100 nm). Because of such intriguing physicochemical properties, they have attracted increasing interest from the research community for both basic and applied studies. This presentation will focus on our research on the development of various metal nanomolecules (e.g., Au, Ag etc.) and their application in biomedical sciences. Aspects of the luminescence and antimicrobial properties of these nanomolecules as well as post-assembly modification through various supramolecular forces will also be covered.

Deep eutectic solvents (DESs) have recently garnered a wide attention in various disciplines, including nanotechnology due to their vast physicochemical properties and 106 possible mixtures that can be tailor-made to suite numerous applications. DESs have been applied as media, dispersants, functionalizing agents, catalysts, electrolytes, nano-based fluids, solvents and
reactants in nanotechnology domain. The implications of DESs have covered a variety of hot topics such as chemical and electrochemical synthesis, nanomedicine, water and wastewater treatment, renewable energy, and nanoengineering. In this presentation, it is aimed to shed light on the key aspects of DESs in nanotechnology and to discuss the promises and the challenges. 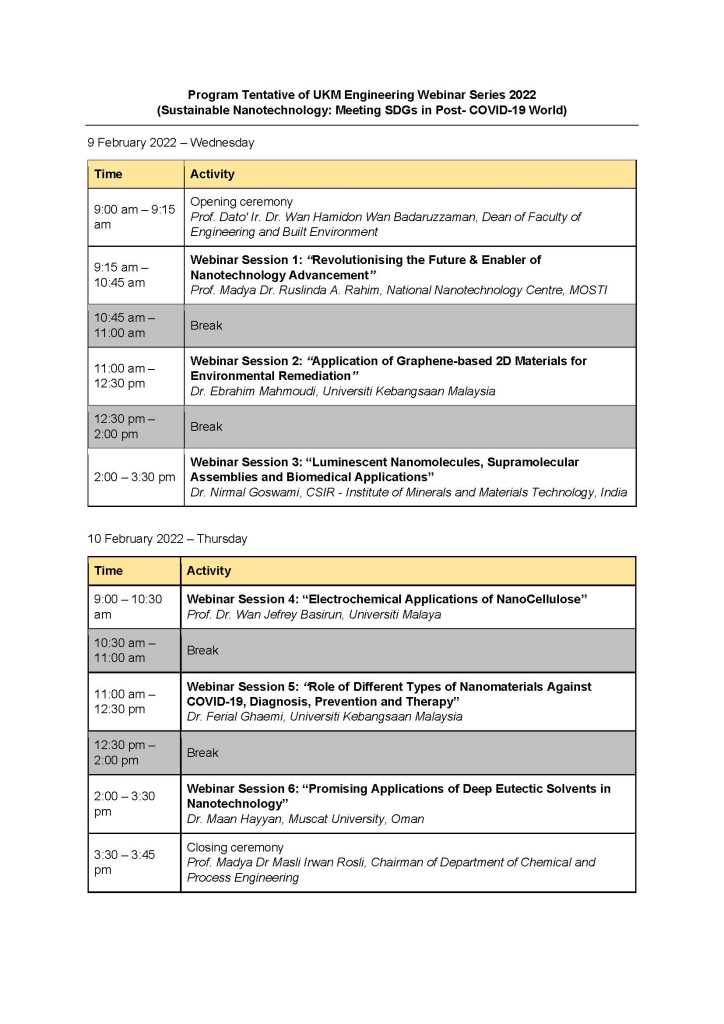 Faculty of Engineering and Built Environment