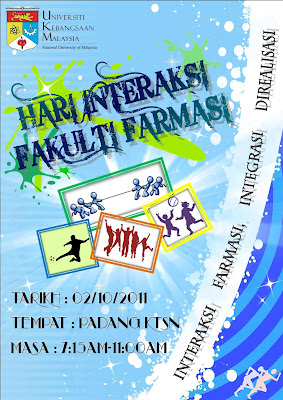 This annual program was consisted of all years of pharmacy students, lecturers, and pharmacy staffs. We were divided into four groups: Amaranth (Red), Indigo (Blue), Tartrazine (Yellow) and Chlorophyll (Green). The programme aims to strengthen the bonds among participants of the Faculty of Pharmacy and instill culture of excellence in terms of social skills among students. Several interesting activities were held in order to ice break the relationships between participants of different races, identities and backgrounds.

At 7.15a.m, the participants assembled and registered according to their group at the respective places. Firstly, we had an aerobic exercise which was led by a group of 20 students. All participants showed their exciting interest in this warm up exercise. The programme was carried on by the opening ceremony which was officiated by our Dean of Faculty of Pharmacy, Prof. Ibrahim Bin Jantan, and then it was followed by the speech presented by chairman of Interaction Day, Muhammad Munzir Bin Sidi Omar. Later, everyone enjoyed the Choir performance which involved the newbie of Faculty of Pharmacy. 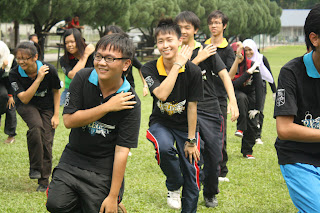 Next, exciting matches between participants officially started on the battlefield. At the same time, kid’s games such as drawing competition were also started and it was specially organized for the lecturers’ and staffs’ children. In the field, all participants enjoyed the games organized and put their efforts in winning the various activities like puzzle, netball, as well as brick game which were carried out simultaneously. Participants were cheered and applauded by the remaining team members who showed support to their beloved team in order to win the matches. Our beloved Dean also involved in the Futsal match and showed his energetic power in the game. The finale match: Tug of War was the highlight and anticipated part of the today’s matches. All of the team put in their maximum level of effort to win and supporters also shouted their lungs out to support their respective teams. Everyone strived as much as possible and utilized their energy fully in order to ensure their team to win the match. It was then the time for the prize giving ceremony after determining the winner for each match. The winner of the overall events belonged to Chlorophyll, followed by Tartrazine, Amaranth and lastly Indigo. 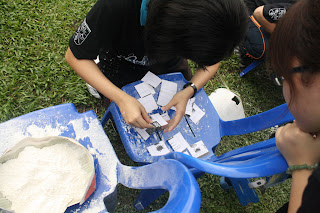 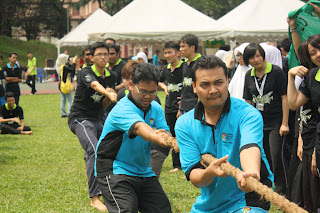 At the end of the program, everybody was exhausted but yet we enjoyed to the fullest on this meaningful interaction day! Winning or losing is not important as we all have tried our best and achieve the aim to unite and strengthen our faculty family by working together and integrate the social skills as well.

According to the chairman of Interaction Day, Muhammad Munzir Bin Sidi Omar said, “I think Interaction Day is among the best day in my life in UKM. I am satisfied with the program held even though some lecturers are not able to attend. I am happy as Interaction Day had achieved its objective and made the students know and interact well with each other.” All in all, we cannot deny Interaction Day is one of the sweet memories in our life. See you next year!