Siam’s Javanese fetish: Cultural anomaly or vestige of cosmopolitan past? 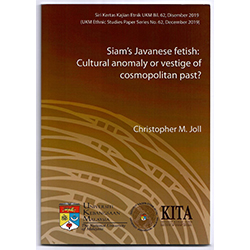 Abstract: Although actively preparing for increased integration in the region in 2015, Thailand is often cited as one of ASEAN’s most ethnically and linguistically homogeneous member. This article considers Javanese presence, and influence in Central Thai between the Ayutthaya period and early Bangkok period, asking whether Siam’s captivation with Javanese cultural forms represent an anomaly or reflect Ayutthaya’ cosmopolitan past. I begin by summarising references to Javanese presence in Ayutthaya and Bangkok in a range of primary and secondary sources. These confirm that, although located inland on a navigable river, Ayutthaya resembled the maritime city-states of the era. Drawing extensively on the work of Davisakd Puaksom, I consider the personalities and processes involved in the arrival, adoption, and adaption of the Javanese epic, Panji, best known in Thailand as Inao. Far from a cultural anomaly, I argue that Siam’s Inao fetish is a reminder about the region’s connectedness, and that Ayutthaya was strikingly similar to cosmopolitan Melaka.