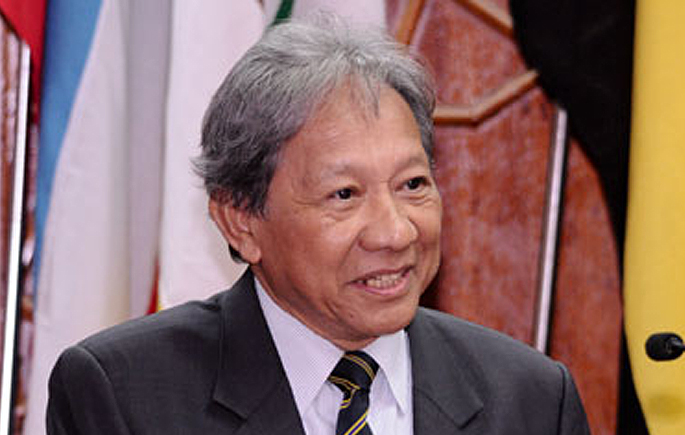 BANGI, 18 May 2015 – It would be easier now for Malaysia and Singapore to settle their outstanding and contentious issues that date back decades.

The  water supply to Singapore agreement, the dispute over Pedra Bianca or Batu Putih Rock and the so-called crooked bridge affair are just a few of those issues that were detrimental to Malaysia,  said Kadir in his lecture titled Malaysia-Singapore Relations: Unsettled Issues and Future Prospects organised by Institute of Malaysian and International Studies (IKMAS) of The National University of Malaysia (UKM) here today.

Furthermore, he explained, there is also mutual suspicion over each nation’s intentions over the other even today.

While admitting that Singapore was not entirely to blame, he said the republic could have been more flexible and sensitive to its neighbours interests when negotiating their disputes.

Kadir said all his views are written down in the book he authoured  ‘Malaysia-Singapore Fifty Years of Contentions 1965 – 2015’.

The 364-page book has nine chapters providing background information about important events or issues from water, dispute over sovereign ownership of Batu Puteh, and the saga of Tun Dr Mahathir Mohamad’s proposal for the  bridge to replace the Causeway.

However, according to the authour the late Lee Kuan Yew had dictated the tone and substance of relations with Malaysia over the last 50 years.

“I wanted to explain the major issues that caused the highs and lows  of the relations between Malaysia and Singapore, 1965-2015, originated from the behaviour of Singapore as devised by Lee.

“I needed to identify the person responsible, more than anyone else, for the way things were. There was no better way of relating this than to detail the role of Lee.

“I also wanted to make the point that Lee had personal scores to settle with Malaysian leaders, thus my conclusion and hope that from now on, with Lee no longer around, better days should emerge in Malaysia-Singapore relations in the next 50 years,” he added.

Kadir said when Singapore was given independence in August 9  1965 by the then Prime Minister of Malaysia Tunku Abdul Rahman, Lee who was chief minister at that time – wept.

“He was speaking at a  press conference carried live on television. Everyone thought he was sad that Singapore got ejected, but actually he regretted that his mission to be the Prime Minister of Malaysia had failed. He regretted he did it the wrong way. He wanted a Malaysian Malaysia. He wanted to rule Malays.

“It was too much, too fast. He regretted he could not achieve his objective. Maybe he should have taken it longer, maybe one decade later,” explained Kadir.

But from then on, Lee, who died in March this year, hardened his stance towards the Malaysian government.

Among other things, Kadir described the acrimonius series of talks on water between the two countries that went on for several years until it ended in 2004 without any agreement.

Under three separate agreements signed in 1961, 1962 and 1990 Singapore receives fresh water from Johor daily. The 1961 pact expired in 2011 but the other two latter agreements remain in force until 2061.

In the meantime, Singapore has developed domestic water supplies and proclaimed that the country and its people will be self-sufficient in water come the year 2061 when all water agreements signed with Malaysia expire.

“There is a perception here in Kuala Lumpur that the Republic is raking enormous money by selling treated water to third parties, namely to ships berthed in Singapore harbour. The 1961 Agreement expired in 2011,while two other agreements are in force until 2061. Let us hope by then, we in Johor and Malaysia can get an equitable deal for our water,” Kadir clarified.

He also traced the protracted dispute over the sovereign ownership of Batu Puteh claimed by both countries that spanned over three decades. A bilateral solution became impossible when Singapore also claimed two additional features in the same vicinity, namely Middle Rocks and South Ledge.

In 2008, the International Court of Justice (ICJ) based in The Hague finally decided to grant sovereignty over Batu Puteh, the size of a football field facing the South China Sea, to Singapore. The sovereignty of Middle Rocks was granted to Malaysia while the ICJ left the two parties to delimit the maritime boundaries in that area to determine which country owns South Ledge.

Kadir was the leader of the Malaysian delegation for this ICJ case as well as for the 2001 victory at the same court which granted Malaysia sovereignty over the Ligitan and Sipadan islands off Sabah that settled the dispute with Indonesia.

On the bridge proposed by Dr Mahathir to replace the causeway, Kadir said Singapore should have agreed to it.

However the prime minister at that time Datuk Seri Abdullah Ahmad Badawi did not secure any agreement with Singapore although Dr mahathir had urged Putra Jaya to stand firm.

Kadir, who was working with Abdullah when the bridge proposal was made, has dedicated a chapter to the bridge saga, his views on it and a chronology of the media war between the Prime Minister’s Office and Dr Mahathir back then.

With all the unsettled issues, Kadir pointed out, It was no wonder that a state of mutual distrust exists between the two nations.

He described as ridiculous, Singapore making a bogeyman out of Malaysia by claiming that its northern neigbour wanted to ‘invade and conquer’ the island republic.

“Malaysia wouldn’t have given Singapore independence if that was what it wanted,” he pointed out.

Conversely, he rejected some Malays concern that the republic wanted to do the same to Malaysia and turn the country into an enlarged Singapore.