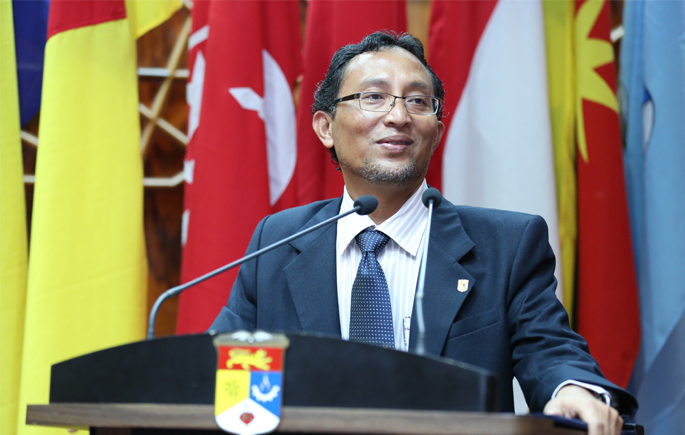 BANGI, May 25, 2015 – The number of Muslim converts in Malaysia is actually higher than the official figures of the Islamic Religious Department.

Research done by the Department of Missionary and Leadership Studies (JPDK), Faculty of Islamic Studies, The National University of Malaysia (UKM) found many converts have not registered themselves with the Islamic Religious Department due to certain reasons, said JPDK Head Assoc Prof Dr Razaleigh Muhamad @ Kawangit.

Dr Razaleigh announced the findings at the 16th Forum of Missionaries and launch of the book Preaching To Converts 2014/2015, here on 21 May.

UKM through the Faculty of Islamic Studies has published the 17 books on the management and guidance of converts in Malaysia, which detailed the results of the research.

Dr Razaleigh said the publications of books are in line with the university’s efforts to step up the number of publications for the year 2015.

He said that during the two years of research on new converts, there were a lot of challenges and obstacles faced by the researchers.

“The book was published in the form of field work. So we (the researchers) went out to seek information through the distributed questionnaires. The biggest challenge we faced was to procure the latest data related to the conversions in the country.

“This is because there are converts who have not registered themselves with the Islamic religious Department for fears of security, family, careers and other reasons. So, we found that the percentage of converts in Malaysia was apparently low, as recorded in the statistics, but in reality this group (converts) is larger than the available statistics because they were not registered with the Islamic Religious Department, “he explained.

He said when the conversion is not officially declared their Islamisation becomes a problem to the Islamic Affairs Department when these people died or divorced.

“This book explains the process of conversion to Islam. They can get this book as a reference, “he said.

Dr Razaleigh said the books published the results of research of lecturers at JPDK assisted by PhD and Masters students who have expertise in the field of conversion.

“100 percent of the authourship of this book is the result of research made by the lecturers two years ago. There are other books that are still work in progress. When the studies are completed, we will publish as a reference book for the public,” he clarified.

He said the book was published to resolve any problems or issues related to conversion, whether at the national or international levels.

“Although the book was authoured in Malay, it still has academic value from a national point of view,” he said.

According to him the books also would be useful for the relevant authorities such as the Department of Islamic Studies, Islamic Religious Council, and non-governmental organisations (NGOs) that deal directly with converts such as the Islamic Welfare Organisation (Perkim) and Malaysian Islamic Dakwah Foundation (Yadim ).

“In addition, the book also aims to help the preachers by providing guidelines in conveying the message to the new converts. Whether used in general form or in specific terms, there are three books that tell about the modules and guidance to new converts resulting from the research I personally conducted,” he explained.

He said people can get those books at selected bookstores costing between RM25 to RM30 after the launch in conjunction with UKM’s 45th Anniversary.

“For starters, these books are sold at the JPDK office. So anyone who wants to read these books can get it there. These books are also available at the UKM library and also University of Malaya,” he added.