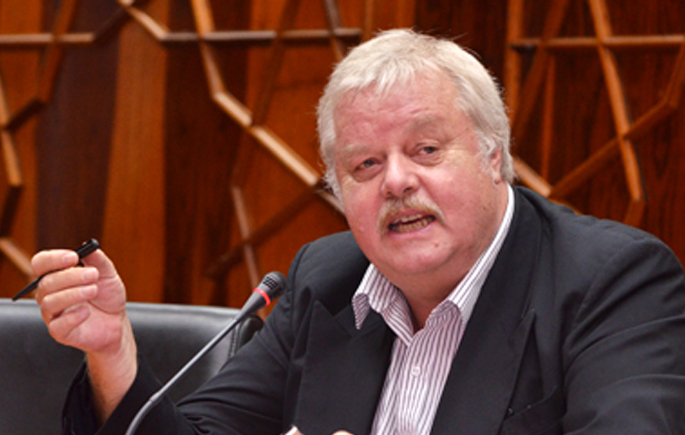 BANGI, 13 March 2015 – With the internet and mobile communications becoming more popular and very widely used, the chances of online users falling prey to snoopers and hackers have also increased tremendously.

Sociologist Prof Rüdiger Korff from the University of Passau, Germany also said governments and private institutions alike are increasingly spying on internet users although the practice is illegal.

Giving a Public Lecture on ‘Media in Southeast Asia and the challenge of new forms of communication,’ at The National University of Malaysia (UKM) here today, Prof Korff said whistle-blowers like the former Central Intelligence Agency (CIA) operative Edward Snowden had proven that the United States had even spied on friendly nations.

“If the CIA had hacked into the mobile phone calls of Chancellor Angela Merkel (of Germany) an ally, then they could spy on just about anyone,” he said at the lecture organised by the Media and Democracy Research Group of the Politics and Security Research Niche, UKM.

Answering a question from UKM News Portal, he said it is sometimes difficult to tell friend from foe when it comes to intelligence-gathering under the current situation of heightened tensions between the super-powers.

Such incidents highlighted the lack of security in modern media and that despite advanced technology, the people are still ignorant of the perils it brings to their lives.

He warned against making comments on social media sites, as their own confidential information can be compromised which might eventually be damaging to them or the organisations they work for.

Asked if online news and social media would eventually deal a fatal blow to traditional printed newspapers and magazines, he said such beliefs had been exaggerated.

“I don’t think conventional media will disappear. I think it will think up of new ways of getting attention,” he replied.

The printed medium had always adapted to challenges and even in the present internet age it will reinvent itself to stay relevant.

“Mobile devices are not easy to read at breakfast time. Conventional media might give up certain fields entirely but newspapers and traditional media will always think of something to attract readers,” he said.

Prof Korff teaches at the School of South-East Asian Studies, Faculty of Philosophy in the University of Passau.

He is a frequent visitor to Malaysia and had given talks at UKM and other institutions here several times.

Director of the Politics and Security Research Niche and the Institute of Malaysian and International Studies (IKMAS) Prof Dr Rashila Ramli attended the talk.