Freshmen Urged To Be ‘All That They Can Be” BANGI, 4 September 2015 – You don’t have to be a straight ‘A’ student to be successful at  UKM but you should try to excel in a field of your choice that can bring accolades to yourself and the university.

Freshman students at UKM were told that life at campus is more than just about academics and were encouraged to do something that can contribute positively by being ‘all that you can be’ in the course of their studies.

Alumni and senior students of UKM gave their best shot at pitching to the first-year students during their orientation week for the 2015-2016 session here today.

They spurred their younger counterparts to be more outward looking and versatile.

Among the motivational speakers at the Bicara Inspirasi, Mengharumkan Nama Universiti or Glorifying the University’s Name session was Lilian Lee from the Faculty of Law.

She and her teammates had won the Air and Space International Law Academy Moot Court Competition in Paris, France on  June 2014.

Lillian is graduating this year and she said when she was in school she never scored straight ‘A’s. But when she became a UKM undergraduate she found her calling in debating, something she couldn’t imagine doing before.

She was the national debating champion for universities in 2013, the only UKM student to represent Malaysia at a competition in the University of Glasgow in Scotland before her sterling performance at the Moot Court competition in Paris.

She advised the new students to start small and join debates at UKM.

“Be inspired, be different,” she said.

Law Faculty alumni Zainal Asnawi Asyraf Zainal Abidin from Amnuddin Baki College spoke about being the champion in the Vice Chancellor’s Cup Debating competition in 2013 and third place in the Royal debating contest 2015.

He also won the Faculty of Law Dean’s Cup this year and the YPC  Chairman’s Public Speaking Championship.

There was also an international student who spoke to inspire the freshmen.

Maher G.M. Abdolrasool from Tobruk, Libya said he was so impressed by the Malay language that he took up public speaking.

The engineering student’s mother language is Arabic, but he is also fluent in Malay.

The third-year student vowed to try again in the contest next year and do better.

He is also the 2015 champion for the Adat Perpateh Public Speaking competition for international participants. 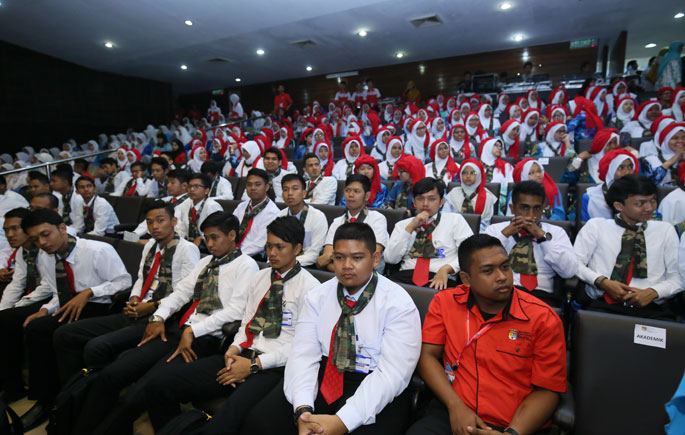