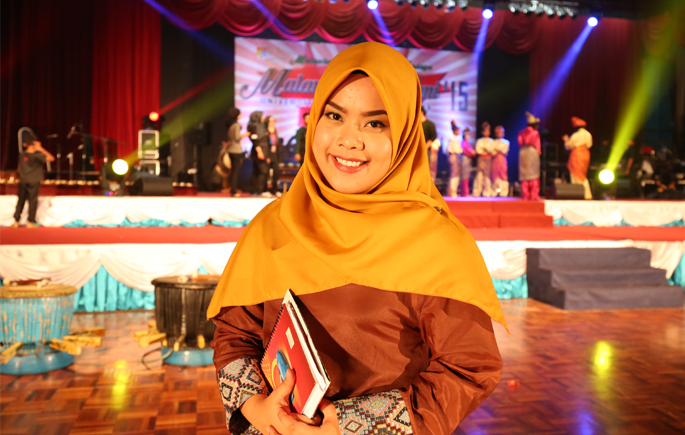 BANGI, 25 May 2015 – The variety entertainment show Malam Citra Seni UKM ’15, organised by the students of Citra Seni has wowed spectators at The National University of Malaysia (UKM) including a delegation from the Bandung Institute of Arts (ISB) which was on a visit to the university for three days from May 15, 2015.

ISB Public Relation Officer, Iin Rizky said she was quite impressed with cultural performances by UKM students and found them highlighting a variety of traditions, culture and races in Malaysia.

“We can see the strong of cultures from every performance. There were many ways that were used in the performances to defend the Malay culture,” Iin told the UKM News Portal after the show on May 16 at the Chancellor Tun Abdul Razak Hall (DECTAR).

She said students could present Malaysian arts and culture with the strengths and weaknesses complementing each other.

“We learn together. At ISB also we highlight the culture of Indonesia because as we’ve seen in recent times, Indonesian arts has fragmented and is waning. So, through this programme, it can recover the culture of art for both countries,” she explained.

On this night, ISB performed two dances; the Peacock dance and Jaipong Tablo as well as a fashion show of traditional attire of Indonesia.

“We brought eight Indonesia traditional costumes and the attire was modelled by students of UKM. Through this we can see the strength of the relationship between our two countries,” Iin Rizky said.

Meanwhile, Project Director of Malam Citra Seni, Nursyamimi Syahira Saripan who is a first year Media and Communication student, said undergraduates from the first until third years took part in 30 performances to complete their Citra courses.

“We have this programme for three days, starting May 14 with Bangsawan theatre and the art of acting, then on May 15, we had a demonstration of traditional Malay self-defence and tonight is the highlight of Citra Seni.

“All the participants cooperated well because their performances will be judged for their respective course of Citra Seni. We have been making the preparations for about a month to make sure that this programme runs smoothly,” she said.

Besides that, there were also the Citra Seni Tampak students who demonstrated their paintings, sculptures and calligraphy in an exhibition at DECTAR.