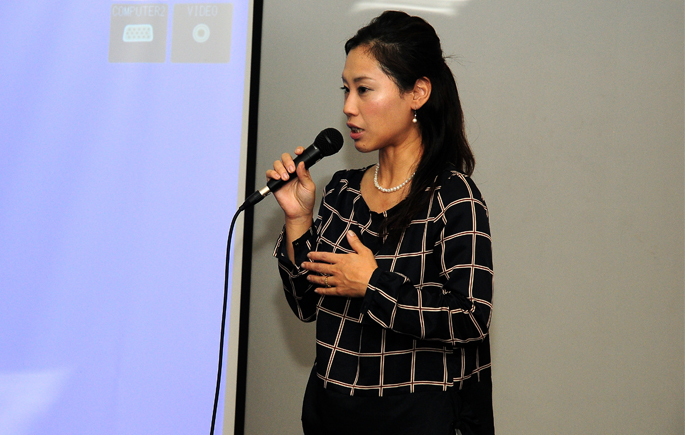 BANGI, 1 March 2015 – Japan should take the cue from Malaysia in allowing more women to hold leadership positions in the public and private sectors.

Business consultant and women’s community leader, Miyako Kodama said Japanese career women seem to lack ambition despite having a 30% quota for women in top management positions like in Malaysia by the year 2020.

Speaking at the International Workshop on Women’s Leadership here today, Kodama, who is  lecturer at Nagoya University of Business and Commerce,  was impressed by the progress made by career women in Malaysia, especially in the public sector.

She is leading an eight-women delegation from Kyushu University at the workshop jointly organised by the Japanese university’s Business School Alumni Network with The National University of Malaysia’s (UKM) Tun Fatimah Hashim Women’s Leadership Centre. They will also be visiting several local companies and government departments in Putrajaya.

Kodama said that her compatriots face obstacles like tradition and a conservative work culture in competing for the top jobs in their chosen fields lamenting that most Japanese career women are meek and defer to their male colleagues when making management decisions.

Though capable, they are not assertive enough at the workplace because they face some cultural barriers with the society still relatively male-dominated where women are generally not encouraged to be assertive.

“Japanese culture is very homogenous. We want everything to be the same. Although the Japanese government has set a target for at least 30% of women are in top management positions, the goal will take a long-time to achieve due to the Japanese culture and mind-set”, she said.

The 30% target by the year 2020 is only a guideline and is not enforced by the government. She expressed doubt whether Japanese companies are serious about it unless they faced difficulties in getting experienced male workers.

Kodama said it is hard for a woman to return to her career after taking a long unpaid leave to raise her family but is encouraged to see some positive developments in employment practices as  Japan faces a shortage of skilled labour.

Employers, especially the small and medium sized companies, she said are maximising talents by wooing their female employees who took time off to have babies, to return to employment.

She, however, felt that Japanese women are not outspoken enough to demand better pay or more benefits.

Due to the cultural constraints, there is a perception that a successful woman who becomes the leader are not being feminine and have to behave like a man in order to impress the male employees.

Director of the Tun Fatimah Hashim Women’s Leadership Centre, Associate Professor Dr Madeline Berma who also spoke at the workshop, said despite the 30% target set by the government, women have to work harder than men to prove themselves.

The 30% target fared better in the public rather than the private sector. “There are still several more layers of glass ceilings in the corporate sector compared to the government service,” she said.

Women are also to be blamed for perpetrating the barriers to their being promoted to management positions since the ambitious women have to work in an environment of back-biting and gossip among other females who feel envious, Dr Berma said.