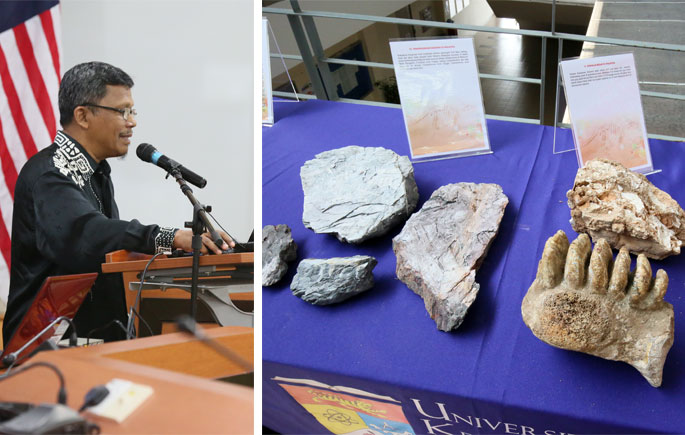 BANGI, June 1, 2015 – Scientists including those from the National University of Malaysia (UKM) have found several small objects that may have originated from fragments of bone or teeth of Dinosaurs at  the Gagau Plateau in Kelantan.

A Lecturer from the School of Environment and Natural Resource Sciences, The National University of Malaysia (UKM) Prof Dr Mohd Shafeea Leman said the team of researchers and lecturers believe they discovered footprints and bones of theropod dinosaur species, including sauropods and carnivorous theropods and ornithopods including Iguanodontids.

He said after this discovery, the researchers who also came from University of Malaya (UM), Universiti Teknologi Petronas (UTP), Universiti Malaysia Kelantan (UMK) and Mineral and Geosciences Department Malaysia will zero-in on the genus and species of the dinosaurs and are conducting systematic excavations at the site of the original discovery with the help of experts.

“We will also preserve fossils ex situ and in situ as well as explore other potential areas such as in Kedah,” said Prof Shafeea in his Public Lecture: Heritage of Dinosaur Fossils in Malaysia, here on May 28.

He said that if the sediments are made up of stones, the chances of finding a complete dinosaur skeleton is higher.

“If we look at China, they (researchers) have found a complete skeleton in finer sediment. If the stones are larger, usually we will only see a footprint or tooth,” he explained.

According to Prof Dr Mohd Shafeea, most Hollywood movies about dinosaurs are accurate.

“They did research of the prehistoric animals producing the films. But until now no one knows for sure what sound they made or the colour of their bodies. It could be just guesswork.

“But no doubt there are indeed people studying them (sound and colour). In terms of dinosaur shape, size, movement, eating and tooth form, the portrayal is spot-on,” he explained.

Fossils are the remains of prehistoric life-forms of various sizes (micron to tens of meters) preserved naturally in sedimentary rock for about 2.1 billion to 11,700 years before humans arrived.

It represents the various taxa of fauna, flora, peptista, monera and others living in different environments and are found in various types of sedimentary rocks.

According to Prof Shafeea dinosaur fossils have been found in a type of sedimentary rocks called Red Bed.

“In Malaysia, we discovered red sediment dating to the Late Jurassic to Early Cretaceous (about 130 million years ago) periods widely scattered in the mountainous areas in the Peninsular, mainly in Pahang and Johor. There are also a few spots in Kelantan, Terengganu and Kedah,” he explained.

He said the fossil flora of the Early Cretaceous period have been recorded at several locations in Mount Gagau namely in Hulu Terengganu, in Maran (Pahang) and in Paloh and Parit Sulong (Johor).

He said the objective of the search for dinosaur fossils in Malaysia is to piece together a replica dinosaur footprint and investigate the validity of the fossilized bones.

“The research team is also investigating the origins of fossilized chunks and look for any additional evidence to show signs that dinosaurs exist in Malaysia.

“In addition, search for dinosaur fossils are also to complement the geological map which we are pioneering and that’s why we the search at the Gagau Plateau in Kelantan,” he said.

He said the results of the research yielded the discoveries of the possible bone fragments, while the larger chunks were found in sediments up to 100 meters thick and one kilometer wide at the cliffs in the forest.

“Within a few days in  Gagau, we found many fossils of tree trunks and leaves in the blocks and on outcrops of landslides in the area,” he said.

Dinosaurs are a collective term for prehistoric animals that lived hundreds of millions of years ago and became extinct due to the impact of the largest metreolite ​​to hit earth 60,000,000 years ago.

According to Prof Shafeea the impact killed off the dinosaurs and drove their remains deep into the earth, thus preserved as fossils in sedimentary rocks.

“Apart from the metreolite impact, there are other factors such as changes in temperature, a sharp fall in sea levels, and too much oxygen in the atmosphere also caused the extinction of the animals,” he added.