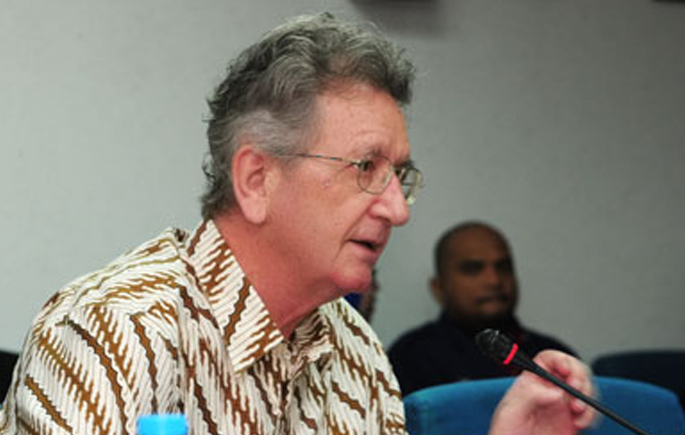 BANGI, April 7 2015 – The verses and poerty characteristic of Malay cultural and historical heritage had been keenly studied by Europeans and became artistic design to adorn chinaware.

A Fellow of the Academy Of Malay Studies at Universiti Malaya (UM) Prof Dr Hendri Chambert-Loir said Western scholars in the 19th century studying Malay literature influenced european artisans to make crockery that were adorned with verses of moral lessons and anecdotal advice.

Prof Chambert-Loir was giving a discourse titled 19th-Century Plates Made in Europe Adorned With Malay Poetry, here on  March 25. He said pantuns whcih were part of oral tradition in the Malay Archipelago, had been used as literary art objects by Europeans at that time.

The discourse was organised by the Institute of The Malay World and  Civilization (ATMA) of The National University of Malaysia (UKM).

The scripts on the chinaware were mostly Arabic with the modified writing known as langkah, were made in the Middle East, Europe and  China and were exported to the Islamic world. However there were a small number of  plates made in England in the 19th century meant for markets in the Dutch East Indies (Indonesia).

Prof Chambert-Loir said the plates were decorated with two types of texts: a poem on the edge portion, and the names of the manufacturer in England with the distributors in Batavia (Java).

“The plate is art on ceramic which is quite beautiful, because the poem is  derived from old Malay literature. The crockery was included as trade products made in Europe for the colonies,” he explained.

Prof. Chambert-Loir who has conducted research of the manuscripts of the Malay Archipelago since 1971, said a number plates were discovered  in several types shrines on the island of Java, such as the tomb of the  Islamic leaders or 12 saints (Wali Songo), for example Sunan Teak in Cirebon and Sunan Bonang in Magelang.

However, he believed that the chinaware had nothing to do with Islamic missionary work in the archipelago because the manufactuters were  Europeans who were not Muslims.

But often times these art objects were still associated with the spread of Islam because of the Arabic sctipt.

However in 1988, the Indonesian Attorney General  ordered all of such artistic plates destroyed because they were deemed as desecration of the holy verses of the Qur’an. These artefacts are increasingly hard to find intact.

Recently chinaware with writings in the native Makassar language using the Lontara script were found in the Netherlands. The only difference was the type of alphabet, but the context and the content were the same. This art is not only found on chinaware, as it was used to decorate fabrics as well as wall paper.

Such objects are displayed and stored in several places such as museums, cemeteries, private collections and antique dealers,  but they are rare   finds.