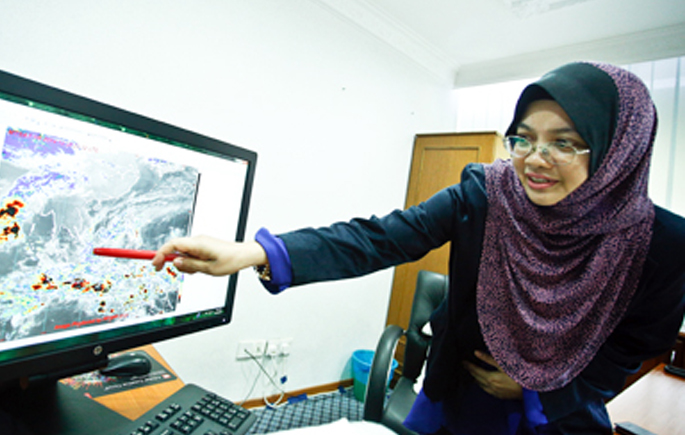 BANGI, 1 January 2015 – Heavy rains from active cloud systems with strong winds occuring simultaneously with the north-east monsoon which brought about high waves to the East Coast of Peninsular Malaysia resulted in the recent heavy floodings in the area.

Deputy Dean (Research and Innovation) of the Faculty of Social Sciences and Humanities, Prof Dr Mastura Mahmud said the combination was further compounded by the full moon phenomenon which resulted in very high tides thereby preventing the flow of river water into the sea resulting in the water over flowing the river banks.

The Northeast Monsoon occurs because of the presence of a high pressure system in China and Siberia and low pressures at the equator causing the cold winds to flow from the north east to the equater bringing cooler tempratures and heavy rains which brought about the floods, she said.

The Malaysian Meteorological Department, she said is equipped to monitor clouds as well as a radar system that can see the intensity of rainfall at any given time thereby giving a comprehensive picture about the rain.

Prof Mastura also associated the global warming phenomenon with the changing weather conditions as when temperatures in the air increases there will be instability in the weather like what had happened in Kedah that brought hurricanes there last year.

She said preparatory measures should be stepped up to deal with such incliment weather.