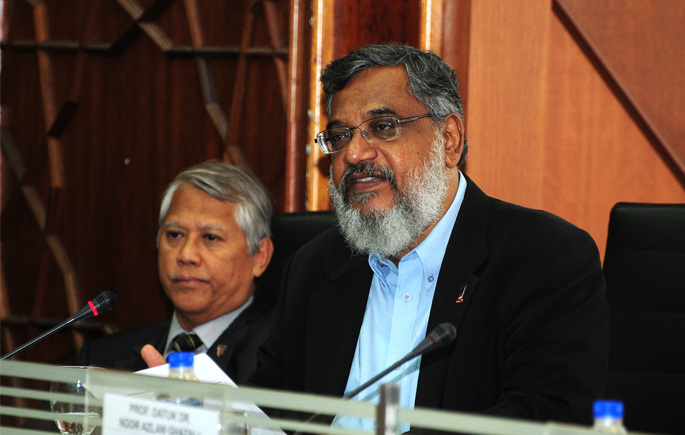 BANGI, 4 March 2015 – Local private institutions of higher learning are more readily able to produce graduates who can meet the demands of the job market compared to public universities.

A forum organised by The Institute of Ethnic Studies (KITA) of The National University of Malaysia (UKM) here today agreed that public universities needed to be more competitive not only in attracting students but also in producing graduates who are held in high esteem.

Participants at a forum titled ‘The Idea of University’ acknowledged that ideas on the role of a university varies depending on whether it is private or public. They questioned the original objective of the setting up of a university and whether such objectives are still relevant in today’s increasingly competitive and ever-changing job market.

Vice-Chancellor Prof Datuk Dr Noor Azlan Ghazali set the tone of the academic discussions by admitting that there was increasing concern that universities may become obsolete.

“The reason for the establishment of a university has changed. Some even think that universities might become extinct. I don’t think so.

“Some researchers talk about scholarly papers. But the private sector wants universities to produce the people that they need. Do they really care about what you are doing? Yes, universities are important (but) their roles are changing. Universities must be ready to change without sacrificing their objectives and without compromising what they are supposed to do,” he said.

He was also worried that public universities may feel so complacent with what they achieved, like writing research thesis or publishing papers, until they become trapped by convention and are afraid to change.

Former Vice-Chancellor of Universiti Sains Malaysia (USM) Prof Tan Sri Dato’ Dzulkifli Abdul Razak lamented that education is becoming an industry or economic spin-off, something that is part of the market.

“So I think a university is no longer a university at all. It’s (now) a factory when we talk about human capital. Universities used to be leading the industry but now the market dictates,” he said.

Prof Dzulkifli, who is now President of the International Association of Universities (IAU) said rightfully a university belongs to the community being a part of it and to serve the people.

“A university cannot be compartmentalised and specialised, it must be holistic, like the institutions during the golden age of Islam,” he said.

The notion that universities are becoming a commercial activity was echoed by Vice-Chancellor and President of Taylor’s University Prof Dato’ Dr Hassan Said, who said Taylor was considering to give more emphasis to Blended Learning to encourage more enrolment.

“We can then have more students and they don’t have to come to campus to attend lectures,” Prof Hassan said, explaining that students and lecturers alike complained about the lack of parking space in campus

Blended Learning is a formal education programme in which a student learns some parts of the curriculum through online content and instructions via digital and online media in an interactive manner. With that a student can choose his own time, place, path, or pace to study.

Nonetheless he still has the option of going to a real campus, having face-to-face classroom activities and combined with computer-mediated activities.

The Chief Executive Officer of the Asia Pacific University of Technology and Innovation (APU) Datuk Dr Parmjit Singh said unlike public universities, APU which is located in Kuala Lumpur responds to market needs.

Dr Parmjit believed that private institutions are serving the needs of school-leavers who are worried about not getting relevant jobs if they go to public universities.

He felt that the regulatory body watching over private institutions, the Malaysian Qualifications Agency (MQA) should give them more freedom in determining fees and deciding which foreign students can enrol.

“Private education is market driven and we are more student-centric,” he said.

He also expressed concern over the declining number of qualified students but assured that APU would not compromise on its entry requirements.