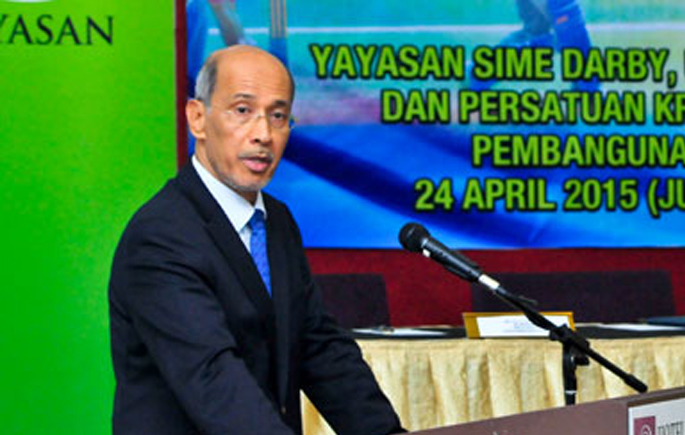 BANGI, 27 April 2015 – The National University of Malaysia (UKM) is set to have a RM1.4 million world-class Cricket oval and pavilion courtesy of the Sime Darby Foundation (SDF).

He said The UKM-SDF Cricket Oval will boast a wicket block using natural grass, recognised by the International Cricket Council (ICC), a Cricket pavilion that can accommodate 300 people, two changing rooms for the teams, a VIP room, a dining hall and two prayer rooms.

“Construction of this world class Cricket complex is in line with the main thrust of SDF namely youth and sports. We are determined to produce more athletes who can join Malaysia’s elite teams and encourage world-class sport,” he said in his speech at the Sponsorship Signing Agreement ceremony between SDF, UKM and the Malay Cricket Association of Malaysia (KMM) here on 24 April.

He said the construction will take about a year and it will be completed by the middle of 2016.

“We hope that this financing from SDF will provide UKM the Cricket complex on par with the Cricket fields at Bayuemas, Klang and Kinrara, Puchong,” Tan Sri Mohd Bakke remarked.

He added SDF aimed to produce more world class Cricket players as it us a strong supporter of Malaysian Cricket.

In 2007, UKM was selected by the Ministry of Education as a one of the national Cricket centres of excellence. UKM started cooperation with the Malay Cricket Association Malaysia (MCAM) where talented Cricketers who passed the National Cricket programme would be absorbed into the UKM Centre for Excellence.

“UKM was fortunate because it could make strategic cooperation with MCAM through the MoU signing in 2007. From there, UKM strengthened the development of the sport and now UKM are among the greatest Cricket teams in Malaysia and respected internationally,” he explained.

He expressed confidence that the construction of the world class Cricket oval will complete the requirement to make UKM a centre of Cricket excellence in Malaysia.

“This facilities at the oval will also allow UKM and Malaysian Cricketers to train,” he said.

He added the university realised that sport is important in athletics activity and mental alertness while becoming a valuable asset to build a competitive community.

“So, Cricket is seen as the main agenda to achieve the goal which has been introduced gradually and even now is a popular sport for students and staff,” he added.