Sanctions Should Be Made Illegal: Tun Mahathir 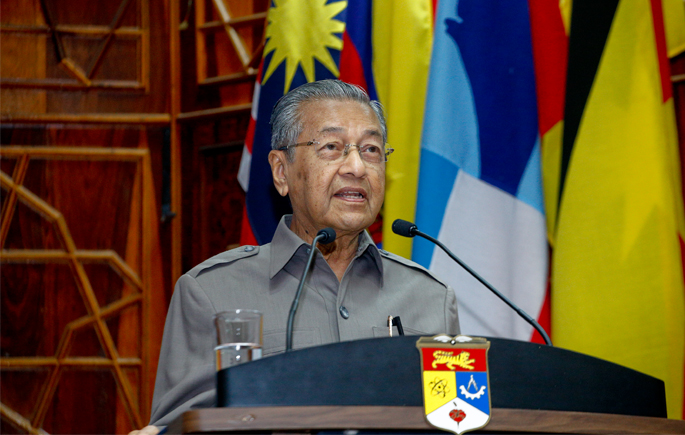 BANGI, 11 February 2014 – Sanctions is often used by the big powers as a weapon of war that had resulted in far more devastating results and should thus be criminalised.

Tun Dr Mahathir Mohamad criticises the United States Administration for taking a moral high ground when it comes to human rights because they don’t practice what they preach.

The US should realise that when they lecture other countries on human rights, they should take a look at themselves first, Mahathir said at a Public Lecture on Malaysia and Cuba Relations here today.

He mentioned how during his tenure as Prime Minister he had strengthened Malaysia’s relations with Cuba despite the United States sanctions against the island nation then.

He likened the US to a crab which tries to teach its off spring to walk straight while it walks sideways.

Mahathir said it was also no secret that the US has legalised torture on prisoners at Guantanamo bay, the US controlled enclave in Cuba. The US should address that first before lecturing others.

He also charged the US of engaging in regime change to keep its hegemony which also turned out to be a disaster for it. It was thus impossible for the US to get people to listen when it did far worse things than what happened in the countries that it criticised.

Mahathir said the US has in fact over 1000 military bases both manned and unmanned around the globe.

The sanctions that they imposed had killed millions slowly by depriving them growth, food and much needed basic medication. He said there is something wrong with our logic about sanctions and wars.

If you killed one person you get hanged or go to prison. But when you killed one million people, you are glorified and back home people built monuments for you.

He gave the example of Malaysia that in the past had conflicts with its neighbors but had solved them through the international court even with the unwise judgment in the case of Batu Putih Island. “We negotiated with Thailand and Brunei and come to a mutually agreed solution”.

Mahathir said “you can’t get solution by killing millions” saying that with sanctions the US punished a whole nation just because that country does not want to submit to US demands. Sanctions impoverish people with the US hoping that the people affected will grovel and come to it begging for the sanctions to be lifted.

Dr Mahathir criticised the United States Administration for taking a moral high ground when it comes to human rights because it does not practice what it preaches.

The US should realise that when they lecture other countries on human rights, they should take a look at themselves first.