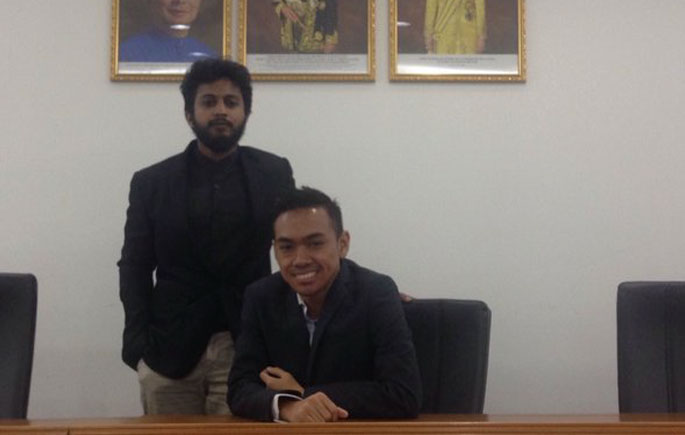 Report and pix By Nadya Rizal

BANGI, 18 Dec 2015 – Students and staff of The National University of Malaysia (UKM) who need to save costs now have the benefit of using a car-pooling service that is only offered to them, as public transport services in the Klang Valley have increased their fares.

An advanced carpooling platform called ‘Jom Tumpang’ registered under the Centre For Entrepreneurship and Small and Medium-sized EntrepreneursDevelopment of UKM (CESMED UKM) is connecting vehicle-owners driving alone to give rides to passengers  who don’t have their own transport.

Jom Tumpang was founded by  Mohamed Haziq Ezwan Baharudin, 22, a post-graduate student and Ismail Shaik Sindamar, 25, an undergraduate student from the Faculty of Science and Technology (FST).

‘Jom Tumpang’ is cheaper than going on a cab, faster than a bus and more comfortable than a train. They will send to the front door if you so wish, said co-founder Ismail.

He explained that that Jom Tumpang’ operates 24 hours upon request.

“Starts as low as RM6 per trip to RM65,  you may ride with us to Negeri Sembilan, Kuala Lumpur and around Selangor. We’re trying our best to expand our service to different states,” he said.

“You’re not only sharing the car but you also help in cutting costs since the fare is based not on per head but per car. While you’re saving money, you’re also preserving the earth,” Ismail stated.

He added Jom Tumpang is registered under the Companies Commission of Malaysia (SSM). All the drivers are qualified since they will go through an interview before they’re accepted to be one of Jom Tumpang’s driver.

Travel more and spend less with Jom Tumpang. For bookings and vacancy,  they may be contacted through Twitter at @Jom_tumpang and Facebook page Jom Tumpang or directly contact with the founder, Haziq 019-7411107 or Ismail 012-5959069.