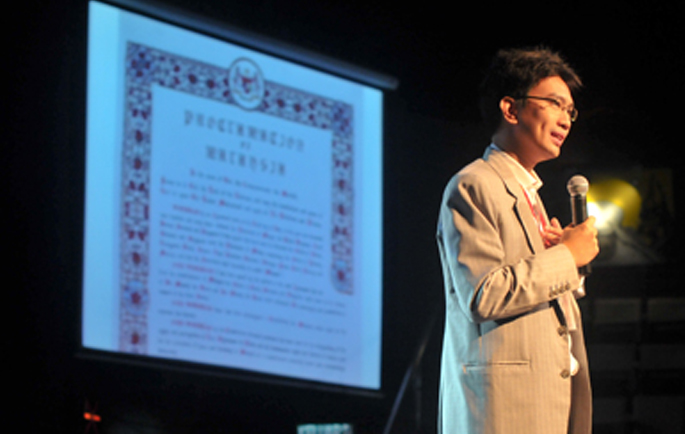 BANGI, 23 March 2015 – Youths of the country have been urged to revive the spirit of independence as propagated almost 60 years ago.

Founding President of the Institute for Democracy and Economic Affairs (IDEAS), Tunku Zain Al-Abidin ibni Tuanku Muhriz said the struggle for independence as inspired by the first Prime Minister of Malaysia (1957-1970) Tunku Abdul Rahman is not just history, but should continue as the essence of progress.

Opening the TEDx motivational conference of a series of talks organised by the Burhanuddin Hilmi College of The National University of Malaysia (UKM) here recently, Tunku Zain Al-Abidin reminded Malaysians to be more tolerant and respectful of one another’s culture.

TEDx is a program of lectures by invited speakers from the public and private universities in which they recount their own experiences with the aim of inspiring others. TEDx founded by TED (Technology, Entertainment, Design), a global conference that brought together inspirational leaders from various fields to come forward and tell their own stories at the gatherings.

Tunku Zain Al-Abidin expressed dismay at the current state of national unity hoping that teens who attended the event would realize how important it was for all citizens to contribute to the prosperity of the nation.

He said, a multiracial country with a variety of different cultures, languages ​​and religions should be protected by all in order to benefit the development of civilization.

He was one of 10 participants who presented motivational talks at the event, which featured music, screening of short films as well as a video presentation from a TED international speaker.

Of the 9 speakers, 3 were either alumni or work at UKM.

Muhammad Alimuddin Bin Zafrullah is a young entrepreneur and the founder and CEO of Salazar.my, a spin-off from the parent company Coffee Theory since 2012.

Alimuddin said big dreams must start from small things and they must seize it with hard work, while in entrepreneurship one must have the skill and courage to grab opportunities available.

Another UKM speaker known only as Siti Shahkirah was the youngest female driver in the Go-Cart Rotax Max World Championship Tournament at the age of twelve.

Shahkirah wanted to prove that girls, too, can succeed as go-cart riders. Initially she just wanted it to be a hobby but now felt it could land her a lucrative contract.

A Lecturer of International Law at UKM, Dr Salawati Mat Basir told the audiences there are many talented people in society but they needed to know how to use their skills. As a lecturer, her main task is to educate the future generations.

Dr Salawati said we need to be able to compete globally as academic intelligence alone is not enough. It must be supported with the ability to build networks and develop the communications skills globally for significant interaction.

TEDx program was established to create ‘evolutionary thinking’ to impress upon Malaysians to be progressive.