The First Ever CSI Forensic Science Exhibition At UKM 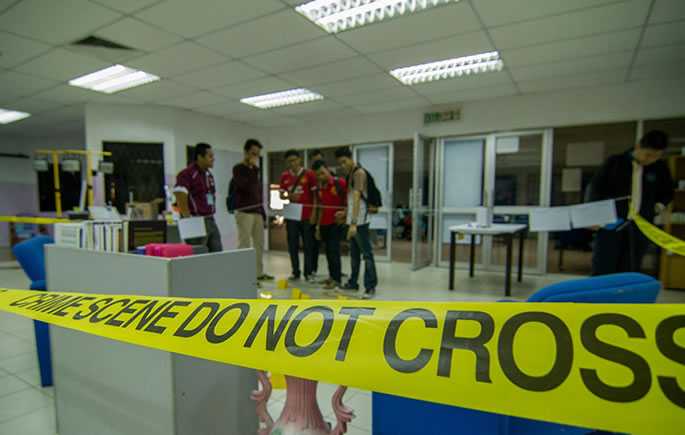 BANGI, 22 July 22 2015 – The world of Forensic Sciences and Crime Scene Investigation (CSI) which had only been seen on television or the movies seemed to have come to life at a recent exhibition organised by The National university of Malaysia (UKM).

That was the impression given by the inaugural Forensic Science Exhibition 2015, organised by the Forensic Science Club, Faculty of Health Sciences (FSK) of UKM in Kuala Lumpur on 26th and 27th March 2015.

At the exhibition, visitors got a first-hand look at the various methods used to track criminals such as mould-preparation of shoe soles and shoe print detection of suspects using electrostatic methods.

The exhibition also featured a simulated crime scene with outlines of bodies and forensic evidence such as clues from blood splashes and hair samples.

In a dark corner, visitors were shown bloodstains and semen using various wavelengths of the light spectrum. Visitors also felt disgust and horror of seeing insects of forensic interest infesting a ‘dead body’ in this exhibition.

Forensic Science Exhibition 2015, held for the first time by UKM, not only attracted staff and students of the university, but also fine-tuned Forensic Science Club members’ communication skills with visitors from different disciplines.

It is also a medium of interaction where visitors can get to know more closely the basic techniques used in a crime scene investigation.

This exhibition can also be seen as bringing to life things that most people only watch on TV or the cinema. It made forensic sciences more palatable for the uninitiated while successfully training the Forensic Science Club members to enhance communication skills with visitors of different fields.

It was a basic introduction to the UKM community the techniques used in criminal investigation.

Deputy Dean (Research & Innovation) FSK, Assoc Prof Dr Khairul Osman in his address suggested that such an exhibition be held on a more challenging venue, such as the National Science Centre.

He also expressed a sense of pride and achievement of the students in organising the exhibition.