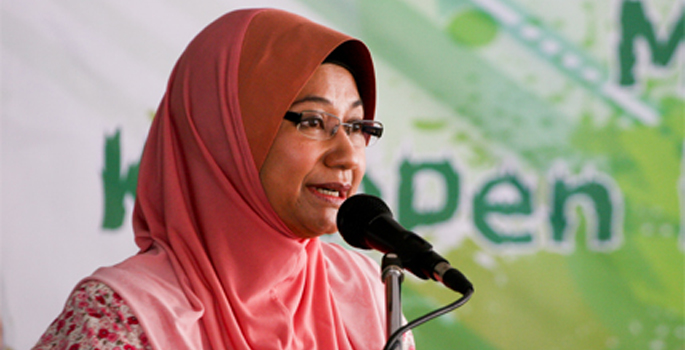 BANGI, 6 April 2015 – Residents of Bangi including the staff and students of The National University of Malaysia (UKM) should only use piped water for bathing, cleaning in the households and washing clothes.

Prof Dr Yang Farina Abdul Aziz, who heads the UKM Centre of Water Research and Analysis (ALIR), said households, including residents of Bangi and the UKM community, should avoid using piped water for purposes that do not need treated or purified water.

Speaking at a briefing during the launch of the Zero Polystyrene Campus Campaign on 1st April lalu, Prof Yang Farina stressed that people in the Bangi area, including UKM had been wasting water, which was partly the reason of the recent chronic water shortage in the district.

“Piped water should not be used to water plants and clean cars. At present, even industries and fire-fighters are using piped water! This is wasteful,” she decried.

She was appalled to learn that even local authorities were wasting water.

ALIR is a research centre that was established in 2005 at the School of Chemical Sciences and Food Technology under the Faculty of Science and Technology (FST).

Prof Yang Farina also cautioned that the demand for potable water — water safe enough for drinking —had increased and there is a greater need to ensure adequate water supply.

“There is a lot of water, but we don’t have enough potable water.

“Out of 437 rivers monitored in the country, 59% are clean, 34% slightly polluted and the remainder 17% highly polluted,” she explained.

In general Malaysians are wasting water perhaps due to the country having one of the lowest water tariffs in the world.

She said authorities had balked at the high cost involved to change and upgrade water treatment plants to filter out more pollutants.

For now, water treatment plants can be changed or upgraded in ‘hot spots’, such as Bangi.

“Technology can also be employed to remove contaminants, such as oxidation processes which are being used in Kelantan to remove naturally occurring iron and manganese from tap water in Kota Baru,” she said.

She gave some advice on how to save water.

When bathing, turn off the shower when you are using soap.

For Muslims, use water sparingly when taking Wuduk or prayer ablution

Water the plants using water that had been used for cleaning

She acknowledged that the recent water shortage was due to the industrial effluents found in the Langat water recently that forced a shut-down at the Bukit Tampoi treatment plant, resulting in lower water pressure.

However, she added that it meant that residents should be even more prudent in using the precious commodity.