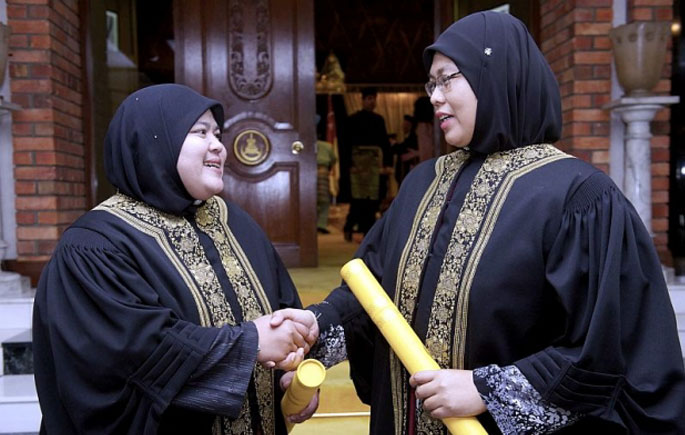 BANGI, 1 July 2016 – Two alumni of the Faculty of Islamic Studies at The National University of Malaysia (UKM) have made history as being the first women appointed as Syariah High Court judges in Selangor and Malaysia.

Noor Huda Roslan, 40, and Nenney Shuhaidah Shamsuddin, 41, both from Banting,  received their  letters of appointment from the Sultan of Selangor, Sultan Sharafuddin Idris Shah in Shah Alam recently.

“However, I wish to emphasise that the appointment of women judges is not a gender issue, rather it is made based on merit,” he said.

He regarded the new appointments as evidence that the state Syariah justice system is progressive and appoints personnel based on ability.

Meanwhile, Nenney Shuhaidah  pledged to do her best to discharge the reponsibilities entrusted to her.

Noor Huda, in turn, said the appointments clearly showed that there is confidence in women carrying out important tasks that hitherto was only done by men.

“Gender is not the yardstick but the ability of men or women. God willing, we will try to give our best and be professional when handling cases,” she declared

She and Nenney Shuhaidah expressed hope that more women in other states will be given the opportunity to become Syariah court judges.

Noor Huda graduated with a Bachelor of Islamic Studies (Syariah, Hons) from UKM in 1999 and a Masters in International and Comparative Legal Studies, School of Oriental and African Studies, University of London in 2011.

Nenney Shuhaidah also graduate in Bachelor of Islamic Studies (Syariah Wal Qanun, Honours) from UKM in 1998 and a Master of Psychology (Counselling) at the same university in 2001.