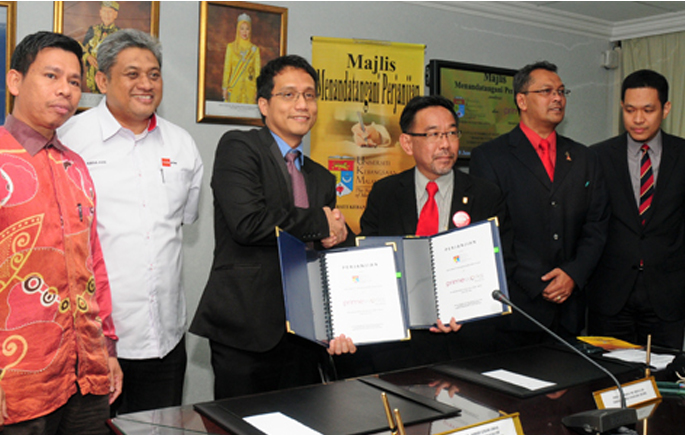 BANGI, 8 January 2015 – The National University of Malaysia (UKM) is collaborating with Primeworks Studios Sdn Bhd to produce documentaries to be aired by TV3 and later by other tv stations overseas.

One documentary titled ‘Ulama Nusantara’ has just been completed and awaiting approval by Khazanah Nasional before being aired.

Department of Arabic Studies and Islamic Civilization of The Faculty of Islamic Studies (FPI) of UKM provided materials for the content and scripting while the fully owned production house of Media Prima did the shooting and post-production of the documentary which will be aired by TV3.

The signing was witnessed by Dean of the Faculty of Islamic Studies (FPI) Prof Dr Wan Kamal Mujani and senior officials of Primeworks Studios.

Prof Imran said the first documentary, funded by a grant of RM25,000 by Khazanah Nasional recounts how Islamic scholars and thinkers had for centuries shaped the development of Islamic civilization in the Malay Peninsula, Sabah and Sarawak.

Prof Imran also praised Farid Mat Zain of FPI who led a team of researchers at the department along with students for their thoroughness in gathering materials for the documentary.

Ahmad Izham said ‘Ulama Nusantara’ which is of high quality will also be aired in Indonesia. There are also plans to adapt it for English-speaking audiences to be marketed to other countries.

General Manager, Content and Media Industry Development of Primeworks, Azhar Borhan told UKM News Portal that Khazanah Nasional Managing Director Tan Sri Azman Mokhtar wanted it to be translated into other languages to market it to other countries.

This collaboration is part of a UKM and Media Prima initiative to assist the flood victims who are facing exposure to water-borne diseases which are common after flooding.

Media Prima has allocated an initial fund of RM200,000 from the NSTP-Media Prima Disaster Fund for UKM to carry out the health relief work focussing on the health and welfare of the victims from waterborne diseases like cholera, typhoid, leptospirosis, diarrhoea and skin diseases.