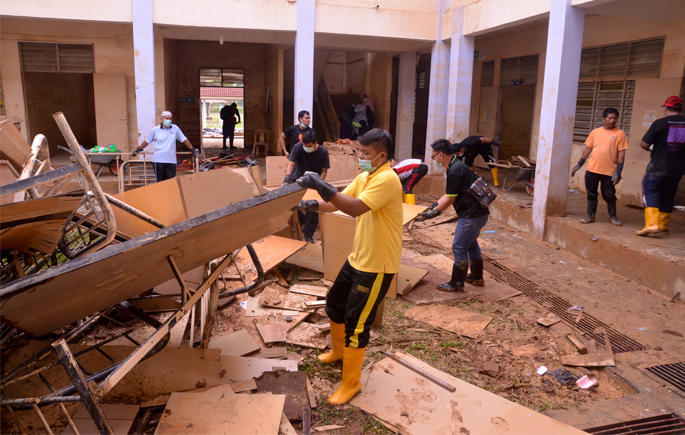 GUA MUSANG, KELANTAN,  14 January 2015 – Some 200 flood volunteers from The National University of Malaysia (UKM) had carried out relief work to assist victims of the recent floods including the cleaning up of the Limau Kasturi primary school here which experienced destruction of almost 80%.

Residents of four flood-ravaged villages were relieved to receive assistance from the mission which arrived here last Friday.

The school’s Senior Assistant (Student Affairs), Ramzi Ilyas told the UKM news portal here that the school would comply with the government’s directive to open the new session on January 11 despite its overwhelming losses and deficiencies.

The school – which have 31 teachers and an enrolment of some 260 pupils – is one of the schools badly affected by the floods.

All parts of the school including the principal’s office, prayer room, cafeteria and stores were submerged. Just a week before the school holidays, it received new text books and 30 new computers from the State Education Department for use in the new school session. All had been damaged.

The Limau Kasturi School was one of the bigger schools in Gua Musang and had kept numerous important government assets such as laboratories and furniture. All the teachers’ files, student records, information and others related to learning had not been spared by the flood waters.

The school’s hostel building for boys and another for girls were inundated and rendered useless with all beds, mattresses and cupboards damaged.

He estimated losses at RM2.5 million but was thankful that the school would receive an allocation from the ministry to replace the damaged articles.

Recounting the ordeal, he said, the school is situated near the river but that was the first time the water levels reached almost to the second floor of the school building.

He expressed relief that that all the pupils were not at school when flooding occurred.

“Some 150 people fled their homes and took refuge on the third floor of the school building, the highest point of Kampung Limau Kasturi, when the waters rose suddenly.

“They were there for two days looking with trepidation at the rising waters. Those left marooned there included the headmaster, teachers and villagers waiting for help which was slow to arrive because of difficulties going over the fast-flowing waters,” he said.

Ramzi had been entrusted by the Gua Musang District Education Office to monitor the current situation of the school which needed more assistance to be rehabilitated.

The school session began on Sunday three days ago without its pupils having uniforms and textbooks but he expected all the teachers and pupils would not be discouraged and remain steadfast despite the difficulties.