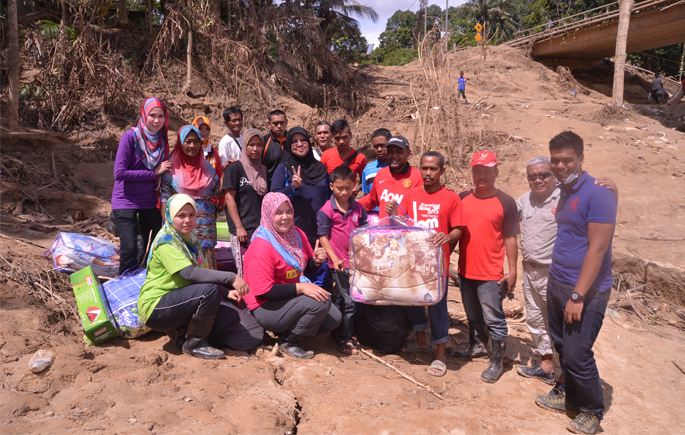 BANGI, 20 January 2015 – Aid Volunteers of The National University of Malaysia (UKM) have brought relief to some 80% of flood evacuees at four villages in Gua Musang, Kelantan.

UKM Senior Assistant Registrar Walid Mohammed Osman, who headed the mission, said more than 200 volunteers have successfully completed the three main tasks of the mission; to clean-up of the primary school, provide medical treatment and health advice and handing out essential goods to those affected in the area, one of the worst devastated by the floods in Kelantan.

Walid said the group distributing relief to the villages was accompanied by Deputy Vice-Chancellor (Student and Alumni Affairs) Prof Datin Noor Aziah Mohd Awal, who also handed over some of the aid packages.

Among the items distributed include food, diapers, blankets, and tents which were delivered to residents of Kg Star, Kg Stelu, Kg Batu Lima and Kg Buah Pala.

Walid said those affected in the area had not only lost their homes but all their possessions as well.

Apart from distributing the goods, the UKM volunteers also cleaned up the primary school, which sustained severe damage. That included the classrooms, dining hall, prayer hall and hostels for both boys and girls.

The UKM Medical Centre team provided health care and assistance to residents of Kampung Limau Kasturi to stave off diseases after the flood as well counselling the victims to better deal with the traumatic events,” Walid told the UKM News Portal.

The UKM team had also successfully identified those who needed help the most.