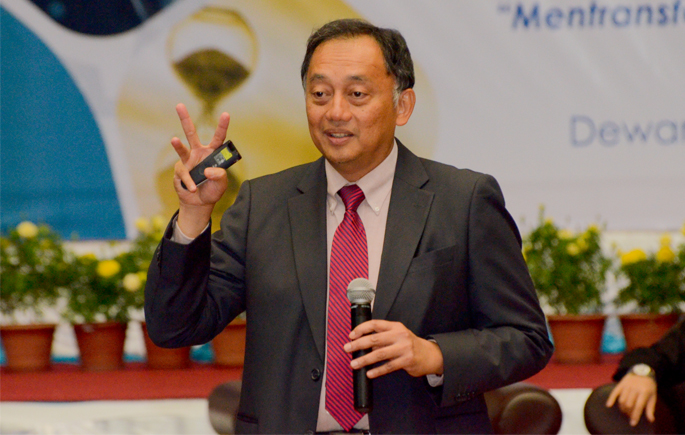 BANGI, 12 February 2015 – Steps must be taken to improve perceptions about graduates from The National University of Malaysia (UKM) as the country opens its doors to skilled labour from other ASEAN states when it becomes a single economic community this year.

In his keynote address titled ‘National Aspirational Graduates, Competent, Competitive and Innovative’, Prof Riza Atiq said efforts of UKM to excel as a research university should not be at the expense of students.

The employability of UKM graduates should not take a back seat as the institution gears towards scientific post-graduate programmes.

“Our graduates are not just facing local competition, they will also have to fight for employment with knowledge workers from neighbouring countries.

“Malaysia is already employing software engineers from other ASEAN countries even before the coming into force of the single economic community this year. Half of the graduates working at Cyberjaya are from Indonesia and the Philippines”.

Those graduates are willing to work harder for the experience and are less choosy about salaries, he said.

At the same time, negative perceptions about UKM graduates being poor in English are still strong among prospective employers.

Prof Riza Atiq did not rule out the fact that many UKM graduates are fussy about salaries at their first job while they also showed lack of communication skills during job interviews.

“We want students who are fluent in Bahasa Melayu and English and if from the Islamic Studies Faculty, then Arabic as well,” he said.

He lamented that many graduates are not equipped to face the outside world because of lack of leadership qualities, confidence and communication skills.

“We are below average (from among the public universities). We have focused so much on research that we forgot about our own students,” he said.

He gave statistics that painted a gloomy picture of the graduates, with skills such as communications, critical thinking, team-work, ethics, morale – all declining.

He said UKM might be doing well in research and innovation but graduates who leave the university – with the exception of the medical and dental doctors – face difficulties in finding relevant employment.

The irony, he explained, was that the less prestigious universities such as Universiti Pendidikan Sultan Idris (UPSI) and Universiti Pertanian Malaysia (UPM) did better.

“UPSI students are taught psychological skills. Psychometric tests are given emphasis at UPSI,” he said.

He, however, sees some hope as studies last year showed the employability of UKM graduates improving to 72% from 58% in 2013.

Prof Riza Atiq said the mindset of graduates preferring to work with the government or government-linked companies should also change where they should be more adventurous and be willing to work in small and medium-sized companies.