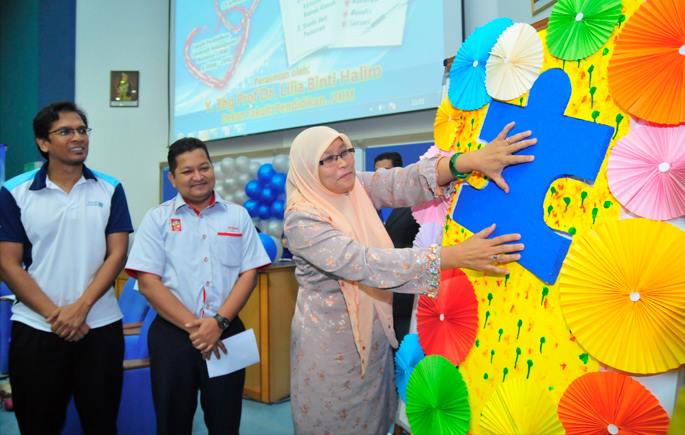 Two of the four children were able to continue learning at Special Integration Programmes at mainstream schools early this year.

“When they first came to us, they couldn’t read, but after six months, they showed good progress and we sent them to the mainstream kindergarten which is under the Faculty of Education (FEP), UKM.

“We were worried that if we hadn’t sent them to the right place, they wouldn’t have the opportunity to socialise and communicate with normal children,” Dr Hasnah told the media after the launching ceremony of the Autism Awareness Day at the FEP on April 19.

She said the FEP aimed at bringing four or five autistic children who were following the preparations at the Autism learning lab to continue their education in mainstream class by next year.

“I feel that for the past four years ago, we were very focused to improve awareness about Autism.

“For example, on April 2014, the Prime Minister’s Department conducted seminars of Autism in Malaysia. There are some positive things but also a downside. What happened was that with the increased awareness about Autism, parents realised that their children were Autistic and needed to do something, so they looked for ways to send their children for guidance.

“While the government is still developing the service, there are certain parties who are taking advantage of the situation by operating bogus clinics and offering their services, which I am greatly concerned about,” she explained.

Dr Hasnah said, the therapy used by the fake clinics could harm the children.

“So, parents need to be careful with advertisements on social media claiming  expertise in children’s therapy for Autism, but the in fact they just want to take advantage of the parents,” she clarified.

She added that Permata Kurnia will monitor that children who had enrolled in the mainstream class informally.

“The parents have agreed to participate in our research related to the development of Autistic children. So we will monitor them informally,” she said.

Meanwhile, one of the parents who brought his Autism son to the programme, Shahabudin Rashid said the boy was diagnosed with Autism at age three.

“I knew my son had Autism when I saw him always keeping to himself and not socialising with other children. My wife and I are working and he was always alone at home with the maid. Maybe that’s why he’s not friendly at home,” said Shahabudin.

He said every four months he will be bringing his son, Muhammad Ihsan, six, to consult with a doctor and do therapy at the Kuala Lumpur Hospital.

“Alahmdulillah my son already knows how to read and write. We just need to teach him to mingle with others as he always does something on his own,” he said.

Shahabudin hoped the government can give more opportunities to help the autistic kids by providing suitable facilities because the costs for private therapy is very costly.

“I also hope one day the government can give job opportunities to the special children when they become adults,” he added.

The ceremony was officiated by the Dean of FEP Prof Dr Lilia Halim.