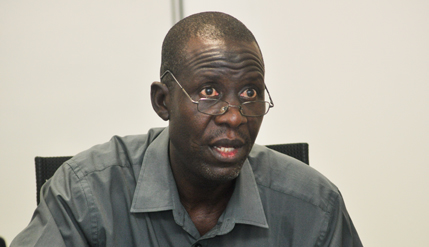 BANGI, 3 April 2014 – The Western media only show the negative aspects of traditional family patterns in Africa, which has damaged the image of Africans in the West.

Abu Bakar M. Miyim, a Nigerian PhD candidate student at The National University of Malaysia (UKM) said Western networks have deliberately given a distorted view of Africa which persists until today, including that of polygamy.

Abu Bakar, who was invited to give a discourse on African Traditional Family Patterns and Inter-Generational Relationship by the Tun Fatimah Hashim Women’s Centre for Leadership, UKM said the only channel that gives fair coverage about his country is China’s CCTV.

He wanted to share the ‘unknown’ side of Africa, its society and traditional family patterns.

He said the African family still maintains its strong bond through traditional practices such as the upbringing of children and maintaining strong family values.

His talk centered on the three major tribes in Nigeria, the Hausa, Yoruba and the Igbo. Abu Bakar who is a Hausa said that the Hausas are mostly Muslims occupying the northern part of Nigeria.

His talk focused on family related issues such as polygamy, tribe, clan, the extended family, the dowry and the raising of children.

He said traditionally, African family practices polygamy because of the idea that the larger the family or clan, the more workers there are to work on the family farms. Hence, more wealth can be possessed by the family.

However, nowadays the practice depended on the religion of the person. Muslims in Africa will take up to 3 to 4 wives, the number permitted in the religion while the Christians only practice monogamy.

The tribe is bigger in terms of size compared to clan but the latter has greater influence on the family. Four factors that link their kinship were profession-derived names, tribal marks, distinguishing personal names and determining the child’s legitimacy as a clan member.

The clan’s name is also included in a person’s name like his which is Miyim which denotes that he comes from the clan’s profession as hunters.

He also has a tribal marking on his right cheek usually given to children at about the age of seven. Tribal marks were widely used during tribal wars to distinguish members of different clans.

Only legitimate children will bear the clan’s name. The naming ceremony is very important as a child will not be considered as a part of the clan till his or her legitimacy is established.

The test of a child’s legitimacy in traditional Hausa customs is by dropping the child’s umbilical cord into a can filled with water and milk. The clan chief will only accept the child as a part of the clan if the cord floats. If it sinks, the child will be considered as illegitimate and disowned.

A Nigerian ethnic group called the Ijaw will throw babies in the river to test their legitimacy. The infant will only be considered as legitimate if it floats. However, Abu Bakar asserted that an infant thrown into a river will always float. “It’s the oldest science,” he said.

The children are then taken care of by their fathers’ brother, not by the biological parents. Nonetheless the real parents do not forget their children for they will continue to visit their children. This practice was done in order to prepare the girls to become wives and mothers and the boys to become husbands and fathers.

The Hausa people are patrilineal. Hence, their household family consists of relatives of the father. However, some tribes in Ghana and Northern Zambia practice matrilineal marriage as the extended family comprises of a man and his wife, their married daughters, son-in-laws, and their children.

He also said that the dowry is not practiced in traditional African society. The practice was introduced by European missionaries and colonialists. Abu Bakar said that African bridegrooms work for the bride’s father as a form of ‘dowry’ to wed his daughter instead of giving money or property.

The speaker is a PhD candidate at the Department of Electrical, Electronics and Systems Engineering and had been a lecturer in one of the Nigeria’s universities.

Present at the talk was the Director of the Tun Fatimah Hashim Women’s Centre for Leadership, Assoc Prof Dr Madeline Berma.