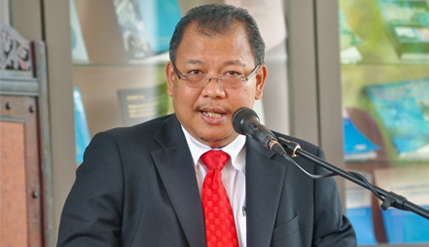 BANGI, 14 Apr 2014 – The National University of Malaysia’s (UKM) Law Faculty is the best in the country and is ranked 17th in Asia.

UKM vice-chancellor Prof Datuk Dr Noor Azlan Ghazali said the matter was compiled in the QS University ranking 2014 by Quacquarelli Symonds, which also produces the annual World University Rankings which placed the faculty at 122 in the world.

The strength of the Law faculty also relies on a solid support system, infrastructure and referral sources that can provide the latest literature reference for students and scholars of law.

He said Tengku Ahmad Rithauddeen, who had just stepped down as Pro-Chancellor of UKM, had discussed with the Law faculty Dean Prof Dato’ Dr Aishah Bidin about his intention to bequeath his personal collection as early as 2012.

The personal collection of legal materials stored since the 1950s would be more useful if given to the Law faculty to be used as reference for students and researchers of Law.

The donation presented by Tengku Ahmad Rithauddeen consisted of 428 titles from 714 copies of legal cases that had been brought over from Kelantan.

The books have now been meticulously catalogued and housed in the Special Collections named after Tengku Ahmad Rithauddeen.

The Law Library was established in March 1985 as a branch of the Tun Seri Lanang Library and moved to the Faculty of Law in June 1996.

To date the collection at the library stands at 100,000 books and manucripts, both in print and in e-book form.

It is also collaborating with other law libraries through membership of the Malaysian Law Librarians Group.

Through this group, the law library is building up a Legal Core to ensure that the UKM library has enough material for a typical law reference centre.