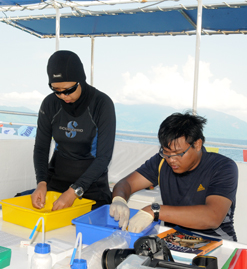 PULAU TIOMAN, PAHANG, 20 Apr 2014 – The National University of Malaysia (UKM) is pioneering the collection of marine animals’ genetic material to build up a species bank for future generations, including medical applications and resurrecting long-dead animals.

UKM’s Marine Ecosystem Research Centre (EKOMAR) Director Associate Professor Dr Shahriman Mohd Ghazali said it is a race against time because the rate of species extinction makes it necessary to collect as many and as much as possible hereditary materials or their DNA.

Speaking to the UKM News Portal today on a research ship near here, Dr Shahriman said molecular biologists and other researchers in Malaysia have to act fast because sea animals and plants are being threatened by pollution and climate change.

“The majority of Malaysia’s marine species have yet to be discovered, named or described. Many will disappear before their existence is even known, “ he lamented.

No other local public or private university is doing this yet but Dr Shahriman hoped UKM can build a partnership with other higher education institutions for this.

He said there will be techniques in the future to analyse the DNA of the species, known as gene sequencing, so that the exact genetic make-up of every marine animal will be known.

“Perhaps the technology will be very advanced but easy enough for anyone to do it, using devices like today’s smart phones and other hand-held devices,” Dr Shahriman predicted.

He hoped that one day, perhaps not in our life-time, the genetic material gathered can be used to clone animals that had become extinct.

“The technology is already available but it’s a question of ethics,” he said.

Known as “de-extinction” the technique can be used now to revive the species by extracting DNA fragments from preserved specimens.

Dr Shahriman heads EKOMAR, a field station at Mersing in eastern Johor that conducts research related to the marine ecosystem and resources. EKOMAR has been established not only to benefit studies on marine sciences and resources but to also incorporate studies in the fields of management, social sciences, marine laws and engineering.

He and other marine researchers have been diving in the waters around here and based on a boat dubbed the Black Pearlwhich plied the spots known to be rich in marine fauna and flora.

Some 15 UKM scientists led by Dr Shahriman were joined by a leading American marine researcher, Prof Dan Distel, director of the Ocean Genome Legacy Centre (OGL) in the United States, to collect samples from the sea floor near Tioman, where the water was up to 25 metres deep. They have special permission from the Marine Department, which is cooperating closely with UKM, to collect the samples.

The effort is also being advised by UKM’s Nobel Laureate-in-Residence Dr Sir Richard Roberts who had a meeting with the scientists on the boat as part of the university’s Nobel Laureate Mindset Programme and Tioman Seribuat Scientific Expedition.

Among the species they gathered were invertebrates such as Sea Urchins, Sea Cucumbers, Coral Reef, Branching Corals, soft corals, sponges and various types of fish unique to tropical waters of the South China Sea.

“Sponges can produce secondary metabolites to inhibit cancer cells, due to their genes. If we can clone the gene sequence that inhibits cancer cells, then we may be able to synthesise a wonder drug that cures cancer,” he explained.

Sponges have the potential to provide future drugs against diseases such as cancer, a range of viral diseases, malaria, and inflammations.

He likened the seas as a marine pharmacy waiting for its biological material to be discovered to produce new medicines.

Dr Shahriman described the Oceans as man’s last frontier on earth to be accessed. There is still much about the oceans to be learnt.

A critical aspect of the so-called Genomic Bank, which has yet to be officially named, is how to preserve the species for a long extended period.

He said Cryogenics is so far the best way to conserve DNA for more than a few years. It is a method using liquefied Nitrogen at -178 degrees Celcius, while DNA can be extracted from tissue preserved with ordinary freezing techniques and kept for a shorter period.

Cryogenics offers hope for DNA to be preserved and one day used for cloning animals that might become extinct.

However, preservation using traditional chemicals such as formalin and alcohol is not suitable, as they degrade the DNA after only six to seven years although the physical appearance of the organism seemed unchanged.

The relatively pristine waters around Tioman island and some smaller islets are a haven for marine wildlife but is also increasingly becoming a magnet for tourists eager to do scuba diving and witness the natural beauty before it disappears.

Dr Shahriman and some of the researchers said they remember just several years earlier that there were more fishes and invertebrates in the sea but their numbers have since depleted.

The changing coastline and development along towns such as Mersing and Tanjung Gemuk may have something to do with it, the scientists said.

They also have to be careful and check the tidal charts for during a full moon or when there is no moon, there will be very extreme tidal conditions, very high and very low tides. So boats may have difficulty leaving or entering the Mersing jetty and Tanjung Gemuk.