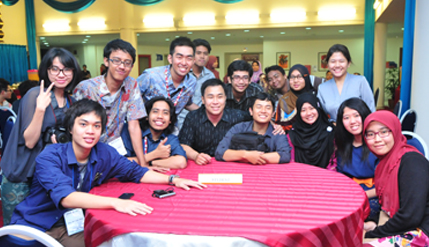 BANGI, 5 Feb 2014 – In a world where old solutions no longer work for current problems, simple innovations can bring extraordinary resolutions to the problems.

Vice Chancellor of The National University of Malaysia (UKM), Prof Datuk Dr Noor Azlan Ahmad Ghazali said innovation is the present day solution and can be done by almost anybody. Innovation is about solving problems faced by society.

He was speaking to over 100 students from Korea, Indonesia and Malaysia who participated in the International Multidisciplinary Design Camp 2014 at a dinner to fete them here today.

He cited many present day examples of how innovation has solved many social problems giving examples which had removed many mental restrictions on the minds. Innovations must also solve problems faced by the community.

They do not depend on the size of a country’s GDP or status of the initiator giving the example of Prof Muhammad Yunus whose innovation on lending had lifted millions out of poverty.

Prof Yunus created the micro credit scheme in Bangladesh which allowed the poor to borrow money to be entrepreneurs.

Another example he gave was a simple idea that had saved countless lives known as the Embrace Baby Wrap.

The ‘Wrap’ has the same effect as an infant incubator to keep a baby warm. Instead of putting the baby in a box which emits heat, the baby is wrapped in a material like a blanket that keeps the baby warm. It was the design of students from Stanford University in the United States.

The baby wrap is having a significant impact in reducing those numbers, Prof Noor Azlan said.

The Wrap is now being used in hospitals in Uganda and had spread to India. The baby wrap do not just save the life of infants by keeping them warm but is also cost effective. It costs only 1% of the price of an incubator and is thus affordable to almost all hospitals in developing countries.

He also pointed out that the amazing innovation was made by students, just like students who participated in the Design Camp. All they need is to leave their comfort zone and go down to the community to find out problems they faced and then fix them.

Prof Noor Azlan said students have an advantage because they have fresh perspectives on things. They can see a way out even when others only see a dead end.

The International Design Camp is a programme that nurtures innovative habits in students. They undergo various activities requiring them to embark on innovative projects.