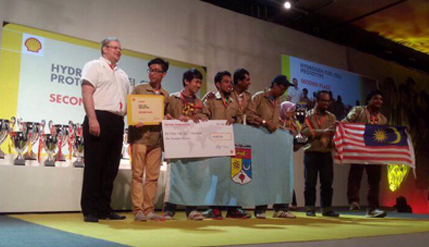 The prototype vehicle, dubbed UKM 2, achieved a maximum distance of 52.09 km per kWh.

First prize in the same category went to another Malaysian institution – Universiti Teknologi MARA (UiTM) with its UiTM Eco-Sprint vehicle which reached a distance of 76.00 km per  kWh.

Four other cars in the same category, including an entry from Universiti Malaya, did not manage to cover any measurable distance.

The Shell Eco-marathon Asia 2014 was held for the first time in Manila, Philippines, from February 6 until today.

Over 100 cars in various shapes and sizes took part in the competition held on the street circuit at Luneta Park in Manila.

The cars were built by students from across Asia and the Middle East in an attempt to set a new record and achieve the highest mileage on a litre of fuel.

This year, a total of 68 Prototype and 37 Urban Concept entries vyed to set a new record in an urban race track – the first time the competition was brought to the city streets.

Student teams participated in one or both of the Prototype and UrbanConcept categories of the competition.

Fuel cell car engines do not emit any polluting emissions or smoke.

The Fuel Cell Institute (Institut Sel Fuel) was set up in 2007 and is the first research institute in Malaysia conducting research on fuel cell and hydrogen energy.