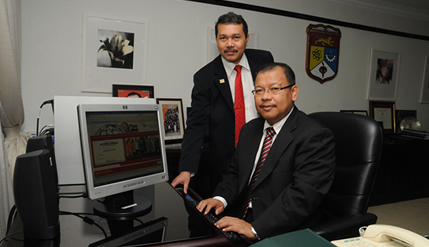 BANGI, 2 Jan 2014 – The National University of Malaysia’s (UKM) role as guardian of the nation will help the University to achieve excellence at the global stage.

Its new Vice Chancellor, Prof Dato’ Dr Noor Azlan Ghazali Ahmad told UKM News Portal in an interview after he clocks in as the Vice Chancellor of UKM today that as a guardian of the nation, the University should also spearhead the country’s transformation programme.

This can be done by staying true to the purpose of its establishment. “The country’s vision is our vision, the country’s problem is our problem and our excellence should also mean the county’s excellence,” he said.

Nevertheless UKM at the same time also has obligations to the global community.

Some may think that because UKM is a national university and uphold the Malay language, it may be a hindrance to be recognised at the international level.

But this is not so as it in fact is one of our unique selling points he said alluding to some universities in Germany and Japan which are recognised as reputable universities and have high rankings.

Tokyo University, for example, is the 27th best university in the world out of the 400 universities selected in the Times Higher Education University World Ranking.

Prof Noor Azlan said the way for UKM to reach world excellence is by staying true to the purpose of its establishment.

High on his agenda is transforming a student joining UKM, into an exemplary person. “We want to make sure that when a person comes to study in UKM to be around the intellectuals, he will be an individual of high value,” he said.

This means that he should become an indispensable asset to the country as well as the industry where he serves and the community he lives.

Not with standing whatever role they needed to play they must be able to give positive impacts. Prof Noor Azlan said that may seem like a lofty goal especially at a time when the government is implementing budget cuts.

He said the budget cuts are opportunities for universities to create their own wealth. What is needed is a simple shift in thinking, a paradigm shiftn where universities needed to start generating their own wealth and start learning to walk without government crutches.

This is a great opportunity, for us to explore new business models, which can help universities develop themselves to be more sustainable. This can be done by a more intensive collaboration with the private sector, government and community.

Prof Noor Azlan said that many great universities also went through such push factor and they have found new operating models which are sustainable and could make them to be exemplary.

This is what UKM is doing and will do more intensively but we will do it according to our mould which will bring excellence to the nation and making our predecessors’ vision a reality if not exceed them.

He said those responsible for UKM, should to start to think in terms of return on investment, so as to shift their thinking to see avenues of wealth creation.

He, however, stressed that it is not just about dollars and cents as “wealth comes when you make a meaningful contribution to those around you”.

One of the vehicles of wealth creation that he identified is consultancy where a good educator and researcher should also be a great consultant.

Thanking all his predecessors who had set a strong foundation, he said UKM is poised to meet the challenge to become the best.