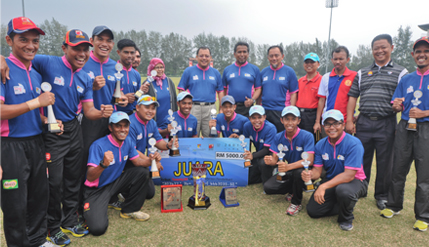 The UKM cricket teams have won the championship for 6 years in a row. This year things are even better when both the UKM teams met in the final game.

Mohd Faizal Abu Hassan from the A team was judged the best player in the final game while another team A player, Mohd Fitri Makram Rosdi walked away as the best player of the championship.

UKM Vice Chancellor Prof Datuk Dr Noor Azlan Ghazali gave away the championship trophy and prizes. Deputy Vice Chancellors of UKM, representative from the Malay Cricket Association and the Ministry of Education were present to witness the final match and prize giving ceremony.