Muslims And Multiculturalism In Britain 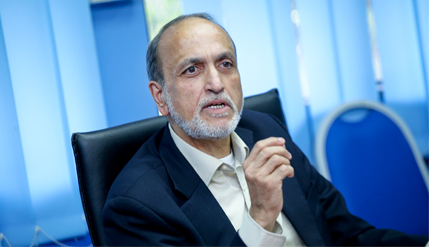 BANGI, 16 July 2014 – The British feel that their own Britishness is dying out due to the increased number of international immigrants especially Muslims settling there to the extent that they cannot accept and appreciate all nationalities and class.

And in the aftermath of the 911 tragedy western governments including the British and their media have openly played on the fear of the Muslim Extremists, a British academic said here.

Dr Ataullah Siddiqui from the Markfield Institute of Higher Education (MIHE) in Leicester Britain was giving a talk on “Muslims and Multiculturalism: A British Experience” here recently. The talk was organised by the Faculty of Islamic Studies in The National University of Malaysia (UKM).

He said Western governments blamed unemployment, human rights violations and crime in their countries on the increasing immigration of Muslims citing the Muslims’ stubbornness to conform to Western standards of life as bringing about too much diversity and beliefs that have become chaotic.

He said the immigrants faced two choices: maintaining their national heritage and cultural traditions or lose everything and become a part of a new hybrid integration in the new country they choose to settle.

He likened the choices as the ‘soup option’ where all their customs, religions, beliefs, values and identity is crushed and blended together into a spongy mix or the ‘salad option’ where the one dish is made up of separate individual parts retaining their original forms.

Speaking on how the Western world tries to deal with Islam and Muslims in their everyday lives since 9/11, he said the Western governments and their media have played on the fear of the Muslim Extremists very openly.

The British Prime Minister, David Cameron had in a speech in Berlin in February 2011 linked Muslims to the extremists and that multiculturalism had died because of Muslims, Dr Ataullah said.

Cameron had openly stated that the world will now have to look out for not only terrorism but for extremist thought, literature and ideology that is Islam. He reviled against Islam as the root cause of terrorism and the cause of death of multiculturalism.

Cameron’s belief was that Muslims brought values, beliefs and customs that are too extreme and poisonous to be allowed to be practiced freely and unattended.

Dr Ataullah said other Western leaders had also put all the blame of immigration, unemployment, human rights violations and crime on Muslims. Stating that Muslims stubbornness to conform to Western standards of life have caused too much diversity and beliefs that is becoming chaotic.

Cameron, he said, believes that Muslims have encouraged different cultures to live separately, apart from each other living side by side but on different paths – causing a vast and varied degree of multiculturalism in Britain.

Dr Ataullah said that Cameron proposed that people in Britain be tested in four areas which they must declare to be part of the country they choose to settle and to show they are not extremists:

“If you agree to those four terms then you’re fine, but if you do not, you must learn it quickly, to avoid too much multiculturalism”.

Dr Ataullah said Cameron’s four terms do not allow the immigrants to choose their own view points. While the soup option of integration looks as if it intends to be a “better for all” proposition to avoid “terrorism” and “extremist”, the multiculturalism salad option will allow people the freedom to practice their own cultural heritage and national pride within another country without feeling alienated, segregated or feel it is a crime.

“The West tends to forget that Muslims too are multi-lingual, multi-ethnic and multicultural group of people. We are Sunnis and Shites and this makes the Muslim community very varied even in religious practices. Yes, we have our divisions and lines, but we are not defined by it, we only see that we are Muslims brothers and sisters,” Dr Ataullah said.

“We can accept and appreciate all nationalities and class, because we only see our Faith, this is something that has always bothered our Western friends. They cannot accept cultural individuality other than their own and they cannot accept that religion unites rather than breaks,” Dr Ataullah said.

He said Muslims do acknowledge that identity is a key for any member of society, but in Britain in recent years they feel that their own Britishness is dying out due to the overflowing number of international immigrants.

Most of Britain’s Muslims community are of Middle-Eastern and Asian descents where their third and fourth generations are facing identity crisis. They are not English but because they have been raised in England they have lost most of what makes them Middle-Eastern or Asian, so they cannot truly say which group they belong to.

Integration has seen the children of these close-knit, religious Middle-Eastern and Asian linage raised to become the forward thinking, modern day Europeans, who no longer hold on to their parents culture, tradition or even language.

He believes that multiculturalism still exists and should be continued so that the values, beliefs, religion and cultural heritage of the Muslims can be sustained.

But having to conform to integration will see Muslims lose their identity and roots, which is also in direct violation of their human rights of being free to practise their beliefs, Dr ataullah said.