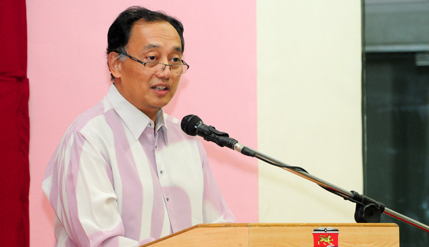 BANGI, 26 June 2014 – Selected students from nine schools dubbed as among the best and talented young minds had gathered at the PERMATApintar National Gifted Centre here to delve deeper into scientific research and be exposed to new ideas and study scopes.

They met for three days ending today in what is known as The Future Scientist Conference 2014.

The conference is an annual event aimed at discovering young, new and talented minds who are creative and have the imagination to innovate in the field of scientific research.

It is also aimed at polishing their talents and skills in scientific research and to expose them to scientific learning at the university level.

The conference was organised by PERMATApintar National Gifted Centre at The National University of Malaysia (UKM).

Deputy Vice Chancellor (Academic and International Affairs) of UKM, Prof Ir Dr Riza Atiq Abdullah OK Rahmat who addressed the students at the end of their stint said the conference was an avenue for the gifted minds to present and share their ideas, research, research experience and focus of study.

He was impressed that one of the students who had participated in last year’s conference had his work published in an international journal.

Prof Riza Atiq said that he was in awe of the bright young students who are still children for their amazing talents having learnt and achieved so much in a short space of time in their lives.

He reminded them that not all children were as lucky them being selected to study at elite schools and thus were preselected for certain events and programmes to further polish their knowledge and skills.

There are other schools in the country with fewer facilities, less teachers and fewer resources where their students have to fight harder to prove they are worth more than the limited resources and facilities that their schools have.

He mentioned about students dubbed as delinquents because they are naughty, terrible or stupid. But are actually intelligent.

Prof Riza Atiq mentioned the Wright Brothers though not formally trained in science with their main business in printing and repairing bicycles and yet able to achieve the almost impossible dream of flight that had eluded the best minds for years.

He also gave the example of the young boy who saved Singapore from hundreds of sword fish attacking the island’s shores killing and injuring those who stood close to the shoreline.

Unfortunately the boy’s intelligence did not sit well with the older and senior advisors of the King who manipulated him to believe that the boy will be a threat against the throne should he be allowed to live and grow up to be a man.

Prof Riza Atiq described the two stories as examples of creativity beyond the constraint of formal, pre-set and rigid education and that not all of those who come from higher and better learning can come up with the answers all the time.

Intelligence, he said, is thinking of things the way no else has, doing things no one has tried before and not being afraid to fail.

Intelligence, comes from imagining new forms of technology and making it real, it is inventing a new way to get things done and is out-of-the-box thinking which takes more than a good education but needs passion, determination and creativity, Prof Riza Atiq said.

Present were Deputy Director of The National PERMATApintar Centre.