Tourism In Pulau Banding Needs To Be Regulated 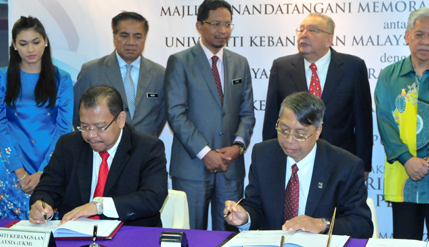 PUTRAJAYA, 10 July 2014 – The growth of tourism at Pulau Banding in the Belum-Temenggor rainforest complex in Perak should be regulated to avoid the destruction of one of the world’s oldest natural wonders.

One of the country’s leading researchers on rainforests Emeritus Professor Dato’ Dr Abdul Latif Mohamad said there has not been any government supervision or monitoring of the increasing incidence of pollution created by the ever-growing number of tourist arrivals at the popular island in the state park.

Prof Latif, who is Pulau Banding Foundation Chairman said he and other scientists from The National University of Malaysia (UKM) and Universiti Sains Malaysia (USM) found that waste management has not kept pace with the popularity of the various tourist spots there and is in danger of collapsing.

Speaking to the UKM News Portal after the signing of the MoUs between the Foundation with UKM and USM here today, he said the researchers are concerned that if the authorities do not step in soon, some of the many islands in Tasik Penunggu would be too polluted to be saved.

“Tourists want to stay in chalets and house-boats there. Many of the islands have already been developed for holidays with seven boat-houses owned by three operators already in operation.

“We foresee that there would be many more to the extent that it would be beyond our control. If development is not regulated, the environment will be adversely affected and perhaps destroyed, especially the lake.

“That is why we started the foundation (in 2007) and approached the Perak state government to act on preserving the Belum Forest Reserve and the adjacent Temenggor Forest Reserve at that time,” he said.

Merely elevating the status of the forest reserve to the Royal Belum State Park has yet to result in sustainable development due to changing priorities and insufficient funds.

“The only big money earner in northern Perak is timber. If the lumber industry expands further from Gerik, we fear that it would encroach into the Belum Forest Reserve and that was why we sought the status of a royal state park. It also has the criteria of becoming a World Heritage Site, which we have applied for,” said Prof Latif.

He hoped the two MoUs with UKM and USM and the pledge of RM5 million endowment by the Prime Minister a few months ago would provide some impetus to conservation efforts there.

The foundation following an initial research came up with the Pulau Banding Charter, a master plan on conservation and preservation of the state park for the Perak government to implement. It provides guidelines on the methods of waste management, including the disposal of human excrement and fluid effluence excrement.

However due to the growing number of visitors there even the master plan will not be able to cope and as such the Perak government which do not have researchers to undertake further studies had sought the help of property developer Emkay Holdings, UKM and USM.

Prof Latif envisaged that if Royal Belum and Temenggor can be sustainably developed, it would have a spill-over effect on the impoverished Gerik and Lenggong districts and maybe turn them into agricultural or tourist hubs.

“We approached successive mentris besar and they were all receptives. Actually the private sector is also interested in developing the islands. Although now only Emkay, what’s stopping others from becoming part of the conservation efforts. We even had someone from Melaka willing to come in,” Prof Latif said.

Rainforests are home to 67% of all living animals and plants on Earth. It has been estimated that there are hundreds of millions of species of flora, insects and microorganisms in the vast natural sanctuaries.

Born in Kampung Parang Puting, Kota Bharu, Kelantan in 1948, Prof Latif is one of the senior lecturers in biology at UKM. He received his first degree in Botany from UM and became a Tutor at UKM. He earned his Doctorate from Reading University, England in 1978. He was made Prof Emeritus in 2008 as an acknowledgement of his contributions in the scientific field especially in biodiversity studies.