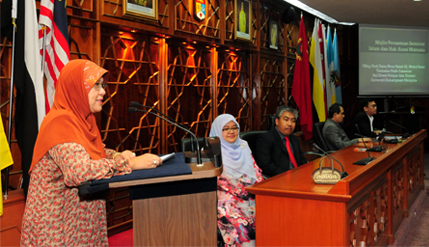 BANGI, 12 Mar 2014 – The Government or any agency or authority in this country must be vigilant and scrutinize any agreement regarding international human rights before signing.

Deputy Vice Chancellor (Student and Alumni Affairs) of The National University of Malaysia (UKM) Prof Datin Noor Aziah Mohd Awal said when any international protocol or convention is signed it means that whatever provisions in those agreements must be adhered to under international law .

Speaking when opening a seminar on Islam and Human Rights: Threats and Future Claims COMANGO Malaysia, Prof Noor Aziah said there are clauses and conditions of a treaty, which may be contrary to the Constitution of Malaysia or national values​​.

The one-day seminar was organised by the Department of Theology and Philosophy, Faculty of Islamic Studies and a research group of religious and Islamic thinking.

She feared that there would be repercussions if the conventions and protocols – especially if the treaty is under the auspices of the United Nations – are in conflict with national laws.

That would result in Malaysia being in default of the convention and may face action which is detrimental to the image of the country.

She urged UKM, Islamic Da’wah Foundation and Muslim NGOs in the UPR Process (MuslimUPRO), as participants and contributors to the seminar, to devise a formula to advice the government in addressing the issue of unnatural sexual practices .

MuslimUPRO is a non-governmental organisation (NGO) that monitors and opposes any attempt to sideline the country’s Islamic laws.

Among the attempts by some NGOs is to have the freedom to apostasy and abolish the Syariah Criminal Offences such as sex outside marriage and adultery, which obviously challenged the Malaysian Constitution and the religion of Islam.

Moreover, the claim that the rights to SOGI (Sexual Orientation and Gender Identity) be given to lesbians, gays, bisexuals and transgender (LGBT ) and religious equality, are threats to Malay privileges. It is also contrary to the values ​​held by the Malaysian Constitution especially the position of Islam as the religion of the federation .

Prof Noor Aziah expressed confidence the seminarcould unravel the issues of Human Rights in Islam through research, publishing and discourses of Islam and Human Rights at the national, regional and international levels .

This can be done through exposure to current issues and analysis of challenges and criticisms in the debate on Islam and Human Rights.