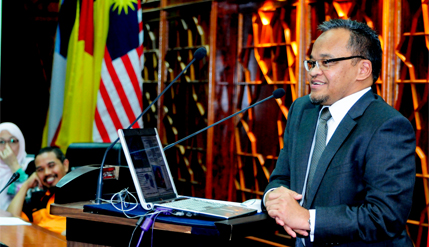 BANGI, 12 Mar 2014 – Academics from The National University of Malaysia (UKM) and other universities are expected to join a think tank team to counter claims by a coalition of non-governmental organisations (NGOs ) lobbying the international community to pressure Malaysia to amend its laws that protect the interests of the Malays and Islam and those that frowns upon the issue of unnatural sex .

Nasharudin Mat Isa, a committee member of MuslimUPRo, a group of NGOs championing Malay Muslim rights, said the team of experts will be selected from among the universities and will be trained to deal with bureaucracy of the United Nations (UN) and the human rights commission mechanism.

Speaking at a Seminar on Islam and Issues of Human Rights: Comango Threats, Claims and the Future of Malaysia, jointly organised by UKM and the Islamic Da’wah Foundation Malaysia (YADIM) here today, Nasharudin said among other things, the team will be made ​​up of international law specialists, French-speaking staff and public relations experts .

He said the team will learn the intricacies of diplomacy, lobbying and public relations to counter the campaign mounted by the Coalition of Malaysian NGOs (COMANGO) in the Universal Periodic Review for Malaysia at the UN Human Rights Commission (HRC) that has dented the country’s image.

MuslimUPRo’s efforts will be assisted by other Islamic countries also facing the same problem due to Sharia law being criticised at the HRC.

“At this stage, the Faculty of Islamic Studies and the Faculty of Law (UKM) and the International Islamic University Malaysia (IIUM ) can come together to collaborate with MuslimUPRo, ” he said.

They must be prepared for the next periodic review of the HRC session in 2017 in Geneva, Switzerland after COMANGO lodged a complaint about the state of human rights in Malaysia at the 2013 session last October, when they demanded equality for all religions and questioned Sharia law .

COMANGO are also demanding that apart from male and female, sexual orientation and gender identity (SOGI) of lesbians, gays, bisexuals and transgenders (LGBT) be recognised in their own right.

“The establishment of the Islamic-based think tank is very important in dealing with the current Islamophobia and secular human rights at national and international levels ” he said when presenting his paper at the seminar.

Nasharudin, who is Chairman of the Nassar Foundation also recommended that the government implement Human Rights Education as a subject in schools and universities .

The ex-PAS Deputy President said the move was necessary to create a second generation of MuslimUPRo intellectuals who can deal with criticisms against the Federal Constitution and Islam by certain parties in the future.

Nasharuddin and other MuslimUPRo committee members will leave for Geneva, where on March 20 they will be official observers to the formal acceptance of the ultimate recommendations submitted to the government in October 2013.

He expected he will have some difficulty in entering the session following smear campaigns against MuslimUPRo carried out by COMANGO.

Among others , COMANGO accused MuslimUPRo of being terrorists and fundamentalists simply because it supports Sharia law and is opposed to homosexuality.