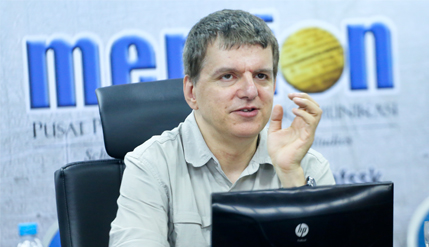 BANGI, 26 May 2014 – Software for university libraries and academic archival need not necessarily be costly and they can even be free yet useful if librarians are trained to use them effectively.

An Oxford University librarian-turned-academic Dr Richard Gartner said most of the digital asset management systems that he teaches are Open Archival Information System (OAIS), such as Fedora and Islandora which may be used to create large, searchable collections of digital assets of any type.

Dr Gartner who lectures at King’s College London (KCL), said Islandora can recognise any file type when used with Fedora and is modular.

He has worked on various projects ranging from river pollution to European History and used open source archival systems that proved satisfactory. His primary area of research is digital library metadata, in particular the development and application of XML standards.

In a talk to academics and students of the School for Mass Media and Communications (Mention) of The National University of Malaysia (UKM) here today, he said Metadata is “data about data”.

Metadata can be compared to the card catalogue of a library while the book or manuscript indexed in the card is the actual data. The main purpose of metadata is to facilitate discovery of relevant information, more often classified as resource discovery. XML (Extensible Markup Language) is a flexible way to create common information formats and share both the format and the data on the internet, intranets and elsewhere.

He however warned that no matter how good an archival system is, a lot of people are needed to scan materials. “Computers can’t check for errors in scanning. Only humans can do that,” he said.

One for the projects he helped set up is the Linking Of Parliamentary Records through Metadata (LIPARM).

“LIPARM is a project to create a standard way of formatting data on Parliamentary proceedings in England, from politicians’ speeches to committee papers, which could open up major new areas of democratic research,” Dr Gartner said.

The LIPARM project was a one-year project to create an XML metadata scheme – a standard way of structuring and labelling information so that it can be easily analysed and compared – known as Parliamentary Metadata Language, or PML.

His core research interest is the use of metadata for integrating complex and diverse digital resources and the role of standards in facilitating that. His other research interests include digital library techniques and methodologies, the role of digital libraries in international development and empirical musicology and how libraries can be linked.

According to the King’s College Website, Richard Gartner is a lecturer who has specialised in the field of digital libraries and electronic information provision for over 20 years. Before teaching, he was the New Media Librarian for Oxford University Libraries where he was responsible for the introduction of the Internet into the Bodleian Library, the Library’s first CD-ROM network and its first digital imaging projects. In recent years, he has specialised in metadata for digital libraries, in which he has published widely.