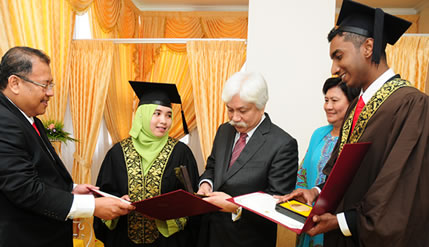 BANGI, 1 November 2014 – Two students, one from the Faculty of Law (FUU) and the other from the Faculty of Islamic Studies (FPI) won the coveted Royal Education Award at the first session of the 42ndConvocation of The National University of Malaysia (UKM) here today.

Surendra Ananth Anadaraju of FUU was awarded a gold medal worth RM1,000, RM5,000 cash and a certificate of appreciation while Nurul Iman Mohamad Anuar Kamal received a cash award of RM1000.

The Royal Education Award is given to students who not only excel academically but also for leadership in extracurricular activities, exemplary personality and dedication to the community.

Another graduate Edna Tan Ai Lin who obtained her Bachelor of Engineering with Honours (First Class) degree for Chemical Engineering at the Faculty of Engineering and Built Environment was given The Vice Chancellor’s Award receiving a cash prize of RM2,500 and a book prize from UKM Publishers.

The Tun Abdul Razak Award was won by Choo Yuen Phing from FUU for her organisational capabilities.

The Tun Abdul Razak Award was set up to give recognition to individuals and organisations for their outstanding contributions to national development in accordance with the objectives of the establishment of the Tun Razak Foundation.