IS An Anti-Islamic Propaganda Manipulated By Western Powers 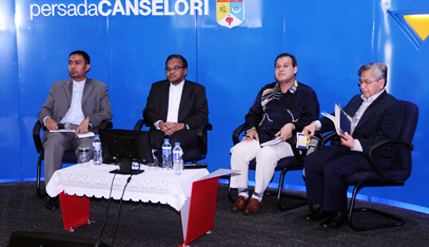 BANGI, 14 November 2014 – The emergence of the so-called Islamic state (IS) West Asia is believed to be orchestrated by western powers to cause instability in the region.

Chairman of the Islamic foundation Yayasan Nassa, Nasharuddin Mat Isa said the agenda is to block the advance of Islam and project an image of Islam as a religion that is filled with violence.

Speaking at the Bicara Persada forum in The National University of Malaysia (UKM) here today on “Jihad and the Islamic State (IS): Opening The Question” here today, he said the Islamic revival in some countries of the region has prompted the major world powers to halt the rise of Islam.

Speaking from experience, he said while at an airport in Turkey, people will stop their work to pray during noon prayer time. This shows the higher a religious consciousness.

According to him, this resurgence has pushed them (Western Powers) to undermine security in Muslim countries. They see what’s happening in Istanbul which has become an entry point of Islamic fighters who are passionately committed to the principle of jihad.

“The group took the name of Islam as a conduit for fighting while violating Islamic law to defame the sacred name of Islam,” he said.

Nasharuddin also emphasized the background of the IS group formed as a result of the breakdown of the Al Qaeda. IS was officially established in 2013 and they are determined to expand their power.

A lecturer at the Department of Usuluddin, Faculty of Islamic Studies (FPI) UKM, Dr. Muhammed Razak Idris commented on IS from the view-point of Islamic thought. He analyzed IS on the question of the relationship between religion and society.

“When it comes to its own environment, it will manifest or form a distinctive pattern of thinking,” he said.

According Dr Muhammed Razak the IS mindset is radical or extremist. They are very hostile to Iraq which is perceived to be a country that practices democracy and must be opposed.

He said even the leaders of Al-Qaeda, which in itself is regarded by the West as an extremist group, have condemned IS because it goes too far in their idea of Jihad.
In his opinion IS is considered a radical trend that cannot be accepted in the context of contemporary Islamic movements. Among these are their views on jihad, which calls on a world-wide crusade on western powers and their proponents. They believe that jihad is a weapon to solve the problems faced by Muslim countries today.

“Muslims who practice systems other than Islam is seen as deviant and they cannot be leaders,” he said.

IS is targeting young people around the world to practice the concept of jihad and martyrdom, he added.