Masters Degree Holder Who Wants To Continue Serving In The Army 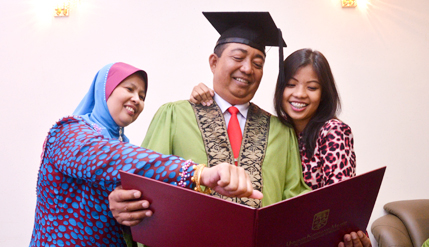 BANGI, 7 November 2014 – A career military officer who earned a master’s degree from The National University of Malaysia (UKM) intends to continue serving in the Armed Forces until retirement.

Lieutenant Colonel Falulin bin Senan of the Royal Engineers Regiment said the course he took required a strong determination to succeed besides a lot of sacrifices.

Col Falulin who received the Dean’s Award for his Masters in Defence Studies at UKM’s 42nd convocation last week has served in the military for 31 years.

He was among the 40 students of the Armed Forces Defence College who received their degrees at the graduation ceremony after pursuing their one year course until Jan this year.

They consisted of 32 senior officers of the Armed Forces who selected to attend the course. The Royal Malaysian Navy (RMN) and the Royal Malaysian Air Force (RMAF) had 7 personnel each, while 18 are from the Army. The rest were officers from Nigeria, Singapore, Thailand, Indonesia, Philippines, Brunei, the police and an Administrative and Diplomatic Service Officer.

His wife Noraini Abdul Ghaffar, said she understood her husband’s duties and responsibilities, as well as his perseverance as he struggled to pursue his ambition to achieve excellent results.

Their only daughter, Aini Fazleena, 21, is a first year student at the Management & Science University (MSU) in the field of International Business. Aini Fazleena said the spirit shown by her father inspired her to continue studying at the tertiary level.

Col Falulin on behalf of participants from the armed forces expressed appreciation to UKM, the Dean of the Faculty of Social Sciences and Humanities and the academic staff involved with the course.

The course consists of 3 semesters; a module on Strategic Studies and International Relations during the first semester, military science in the 2nd half while finishing their Masters’ thesis during the third semester.